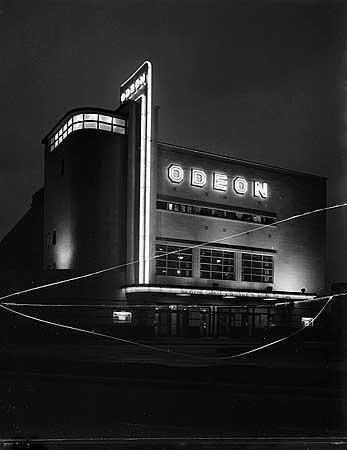 Built for the Oscar Deutsch chain of Odeon Theatres Ltd. The Odeon Shannon Corner was located on the corner of the Kingston By-Pass and Burlington Road, New Malden, and was sometimes known with the New Malden name, and also known by the name Odeon Merton, as Merton was also close-by. Designed by prolific cinema architect George Coles, the Odeon Shannon Corner was to be his last Odeon Theatre design.

It was opened on 7th November 1938 with George Brent in "Gold Is Where You Find It" and Jane Withers in "Rascals". The facade was covered in cream faiance tiles, and had three large windows allowing light into the circle foyer. Above them were three smaller windows, with the Odeon sign in large letters above. There was a slim fin-tower on the left-hand side of the facade, which had the name ‘ODEON’ on top.

Inside the auditorium, seating was provided for 961 in the stalls and 600 in the circle. There were three lay-light fittings in the centre of the ceiling. On the splay walls each side of the proscenium, were decorative grilles with horizontal and vertical bands.

The Odeon had an uneventful, and rather short life, and was closed by the Rank Organisation on 2nd January 1960 with Danny Kaye in "The Five Pennies" and a short "The Ama Girls".

The building was converted into office use for the Decca Navigation company. They vacated the building around 1979, and it was demolished in February 1985, and the site became a car park. By 2008, the Shannon Corner Retail Park had been built on the site, and it contains a branch of Harvey’s furniture store.

A set of vintage photographs of the Odeon Shannon Corner/New Malden/Merton:
View link

The postcode and location mark are wrong. The Odeon Shannon Corner was in the angle where Burlington Road meets the A3 Malden Way. The text above correctly says that Harveys or Bensons for Beds (Google gives Harveys, the map on her gives Harveys) and the associated car park are on the site of the Odeon. The postcode is be KT3 4LP. I have established this from investigating Decca’s use of the site between Malden Way, Burlington Road and Albert Road. See my uploaded photograph.