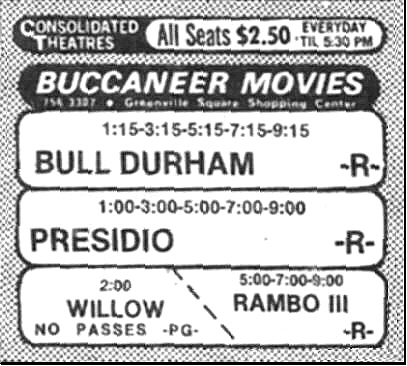 It was known as ‘Greenville’s Luxurious New Twin Theatres’ when it opened on June 16, 1977 as the Buccaneer Movies 1 & 2 under Charlotte-based Consolidated Theatres. It had a seating capacity of 600 (300 in each auditorium that were divided by a concession stand in the middle). The Buccaneer Movies 1 & 2 was Greenville’s second twin theatre that was located in the Greenville Square Shopping Center on Arlington Boulevard.

By December of 1978, a third auditorium was added which split the second auditorium into two sections with 150 seats in each). It was renamed Buccaneer Movies 1-2-3.

The Buccaneer Triple Theatres was closed by Carmike Cinemas in 2000 due to Carmike’s bankruptcy, along with all other Carmike cinemas and their discount grindhouses that were east of Raleigh.

Google street view shows that this theatre has been demolished.

Confirmed. All that is left of the theater is an empty log and the marquee sign post that is now a camera mount for a local TV Stations Traffic Cam.

This theatre opened in 1977 as the Buccaneer Movies 1 & 2, a twin theatre with a lobby divided by the concession stand. A third auditorium was added a year later in order to compete with the newly expanded Plaza Cinema (which went from twin to triple shortly after the Buccaneer opened). Carmike bought the Buccaneer in 1989and slowly ran it into the ground. In 1998 the Buccaneer became the dollar theatre in Greenville after the downtown Park Theatre was closed. The Buccaneer closed around 2000 due to Carmike’s bankruptcy,along with all other Carmike “dollar grindhouses” east of Raleigh.

The site of the Buccaneer Movies 3 is now occupied by the new main studio of WITN-TV Channel 7, the local NBC affiliate.

I have found the original ad for the Grand Opening of the Buccaneer Theatres. The information for this theatre will be revised and upgraded. I do have in my possession the original ad from the Greenville Reflector from June of 1977.

The Buccaneer Theatres opened in June of 1977 as a twin cinema and later on during the early-1980’s it was a three screener under Consolidated Theatres.

The television studio located at this site is new construction. The Buccaneer Movies 3 was demolished by 2005, after a bogus “church” was evicted from the former theater.