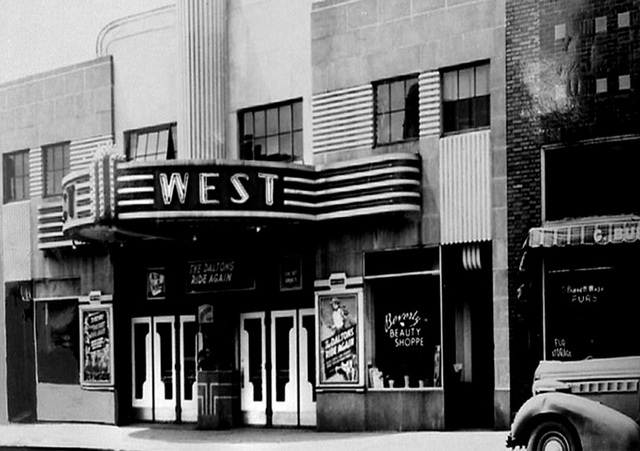 It reopened as the Duluth Theatre in June 1966. In the mid-1970’s it operated as an adult theatre into the early-1980’s. It has since been converted to a retail store called Quilters Coop.

It was renovated and reopened as the West Theatre on June 21, 2019 with Janet Gaynor in “A Star Is Born”.

Some of the information given on the early Duluth theatres is wrong on CT so I will update it all at a later time when I have all of my research and notes together. The West Theatre was built in 1937. Before it opened, owner J. B. Clinton died, and partner Clarence Kaake, a property investor/realtor, eventually became sole owner in 1941. West Theatre closed in late 1950s, and was an on again/off again operation by then. Jake Musich reopened in ‘59, closed briefly in May 1966. Reopened as the DULUTH THEATRE with the first run of “Sound of Music” in June '66. (It later had the first run of “Doctor Zhivago”) From 1969 on, the theatre had several operators, usually the same operators also had the Granada in Duluth and the Beacon in Superior, WI. The Duluth Theatre had a very sketchy and unfocused film policy throughout the 1970s, ranging from soft to hard porn, first run major Hollywood features, and 2nd runs with a 99-cent policy. In the mid-70’s it was called the “Duluth Spirit Valley Theatre” in newspaper ads only because that area of town was trying to change its image (not successfully). In the early 70’s and again around '78-'80, the theatre would sometimes be closed for weeks or months at a time. Newspaper advertising was sometimes nonexistent. The last Hollywood features to play in the theatre appear to be January 1980; after that until 1981, there were showings of porn on an inconsistent basis. The building was mostly dormant from 1981 until a quilt shop opened in 1997.

The first year that the West was listed as open was 1938.

Construction started soon after the building permits were pulled in Sept. 1937. Do not go by “Motion Picture Almanac” and “Film Daily Yearbook” for these citations. Seating capacities are wrong 97% of the time and nailing down open/close dates by using those books is also very precarious. All they are good for is giving us a very ballpark idea of the existence of a theatre, and not much more than that. It’s a starting point for further research.

The December 18, 1937, issue of Boxoffice said that C. W. Kaake planned to open his new West Theatre on Christmas Day. The house had been designed by architect Perry Crosier. Kaake also operated the Doric Theatre.

To clarify, this theatre should be listed as either the Duluth Theatre (1966 on) or the West Theatre (1937 to 66 name). The name on this page’s header should be changed and eliminate the Spirit Valley. That was only an advertising gimmick tried by businesses in that area during the mid 1970’s and on. The theatre name never was officially changed. Crosier did a lot of theatres in MN and WIS in the late 30s, but I haven’t come across indications he did much work for the larger chains – he seemed to do work for independents and small local chains. The Paramount work around here was primarily done by Liebenberg & Kaplan. Kaake died in 1993.