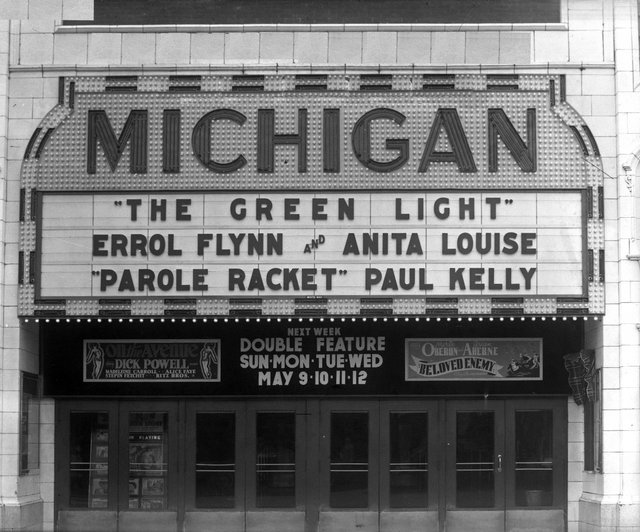 Located on the south side of Chicago. The Michigan Theatre was opened by the Lubliner & Trinz circuit on December 27, 1916 with Howard Hickman in “Civilization”. It could seat nearly 1,400 and presented both vaudeville and motion pictures.

By the time it was demolished this building was a hulk. I photographed it in the late 80’s. You could climb through the boards on the front entrance into lobby. There was concession equipment (and other objects) scattered all over the tile floor of the lobby, which still had “Michigan” inscribed below the entrance. The fire doors had been bricked up, I guess to prevent gangs from entering. The theatre had an interesting attraction sign. Like the Loews Paradise in the Bronx, it did not extend out over the sidewalk. There was not a stage house. So, if the theatre did have live attractions, they were carried out on one of those small (non-working) stages. Strangely enough, there was one retail tenant left in the building: a beauty shop. The rest of the store fronts were abandoned. The offices above also seemed to be. I was once told that the Michigan closed in ‘69, which would mean that the theatre went unused for twenty-five years before it came down.

The Michigan was open at least through early Oct. of 1967. However, it must have been struggling to get more people inside. From the Chicago Sun Times movie listings on Sunday, Oct. 1, 1967: MICHIGAN THEATRE 110 E. Garfield Ave. Tele. 546-9607. FREE POPCORN TO 1st 50 CHILDREN James Coburn in “IN LIKE FLINT” “RETURN OF THE SEVEN” “PREHISTORIC WOMEN”.

I just added the above photo of the Michigan that I took sometime in the mid 1970’s.

Great marquee. What a waste to tear this theatre down and let it go into ruins. Whats new?