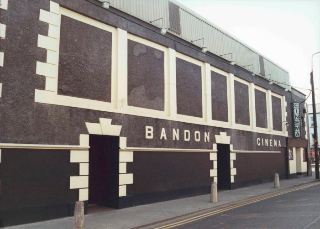 A small rural cinema located at the corner of S. Main Street and Market Street in the West Cork town of Bandon. The Cinema Hall was operating by 1937.

The hall is designed in the typical local style peculiar to Irish cinemas. A long low building located on a corner with a few architectural features outlined in red paint.

Inside the auditorium, the proscenium was 25 feet wide, and there was a 14 feet deep stage. It retained the name Cinema Hall until at least 1966.

It was still open in 1996, but has since been demolished and a library and retail units have been built on the site. The operating company ceased trading in 2005.

A “Cinema” is recorded in the 1923 edition of the Kine Year Book run by J. Powell with Bandon Cinema appearing in the 1928 edition run by T. Lowney. He or she appears to have been partnered with a Mr O'Brien from 1942 with O'Brien going it alone by the early-1960s. Electric Rep was later replaced with a Western Electric sound system.

It was still operating in 1996, as Spy Hard released that year is being advertised in one of the photographs that I’ve uploaded today.