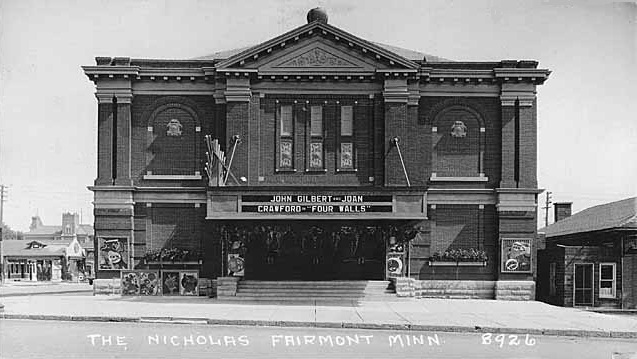 The Fairmont Opera House was opened in 1902 with a performance of “The Chaperones”. In 1912 it was renamed Haynic Theatre and became a movie theatre. In 1927 it was equipped with a Marr & Colton 2 manual 5 ranks organ and it was renamed Nicolas Theatre. In 1929 its interior was remodeled in an Art Deco style. By 1943 it was operated by Paramount Pictures Inc. through their subsidiary John Friedl. The Nicolas Theatre was closed as a movie theatre in 1980.

It was purchased by the local community and became a live theatre, returning back to its Fairmont Opera House name.

According to its official website, this theater is open again under its original name, the Fairmont Opera House. It was originally opened in 1902, and a few years later was renamed the Haynic Theatre when it was leased by partners William Hay and Willie Lincoln Nicolas, who operated it primarily as a movie house.

Hay withdrew from the partnership in the late 1920s, and the house was renamed the Nicolas Theatre. In 1929 it was extensively remodeled. The facade retained its original Renaissance-inspired style, though somewhat simplified, while the interior was given a more modern look in keeping with the popular Art Deco style.

The Nicolas Theatre closed as a cinema in 1980. It was purchased by a community-based organization which reopened the theater in 1981 with live performances. The theater was gradually restored, with much of the labor provided by volunteers. The restoration is now complete. The Fairmont Opera House presents live events, including plays and music, and is also used for community events and is available for private gatherings.

The official web site gives the address of the Fairmont Opera House as 45 Downtown Plaza. Here is the home page of the web site. It has the telephone number at the bottom.

Here is a PDF file with a brief biography of W. L. Nicholas.