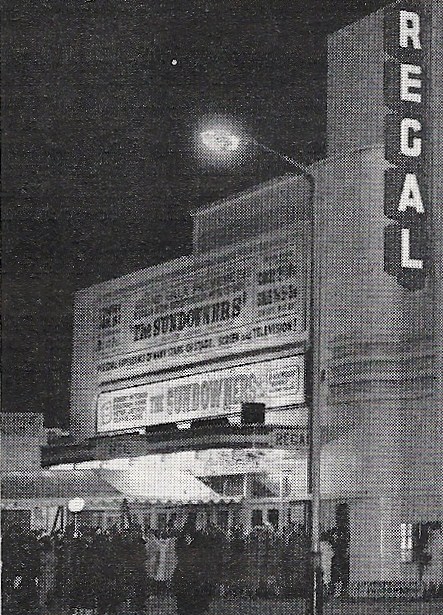 Located in the South Bermondsey district of south London, at the corner of Old Kent Road and Gervase Street and built on the site of a former tram depot. Built for and operated by Associated British Cinemas(ABC), the Regal Super Cinema opened on 18th January 1937 with Clark Gable in "San Francisco" and Gertrude Michael in "Second Wife". Designed in a splendid Art Deco style by ABC’s ‘in-house’ architect W.R. Glen, it was the second largest of ABC’s London suburban cinemas, but had over 400 seats less than the nearby Astoria Theatre, Old Kent Road! There was concealed lighting in troughs in the auditorium ceiling, and on the side splay walls were decorative panels depicting a deer in a forest setting.

The Regal Cinema was equipped with a Compton 3Manual/6Rank organ, with Melotone unit and an illuminated console, that was opened by organist Charles Smart. There was a fully equipped stage which was used in the early days for variety performances as part of the film programme.

On 13th December 1959, the Regal Cinema was the host of a charity premiere of “Tommy the Toreador” starring Tommy Steele, who was born and raised in Bermondsey. He appeared in person, together with his co-star star Janet Monro, and other film star comedians Eric Sykes, Charlie Drake, Terry Thomas, Sid James, Bernard Cribbins and singers Ronnie Carroll and Millicent Martin.

It was re-named ABC in 1963, and the Compton organ was removed in 1965, and later in 1969 it was installed in the Memorial Hall, Windsor. The ABC was closed on 9th February 1974 with Carlos de Carvalho in "Forbidden Decameron"(Il Decamerone Proibito-Le Altre Novelle del Boccaccio) and Eva Czemerys in "Wife By Night"(Bella di Giorno Moglie di Notte).

It was converted into a bingo club, which only lasted a few years. The ABC was demolished in November and December 1981.

A block of flats and a Mercedes Benz dealership have been built on the site.

Vintage photographs and memorabilia on the Regal/ABC here:
View link