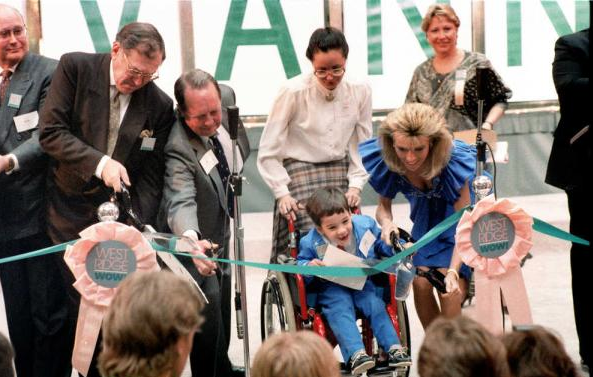 This was located in the northwest corner of West Ridge Mall on the first floor. It opened with the mall March 2, 1988, and closed April 21, 2005 and was vacant up until 2007, then it was gutted and turned into a clothing store.

One of the outstanding features was the mirrors behind the ticket booth (no windows, just a desk), and the crown motiv decorations around the lobby and inside the individual theaters themselves (red and fuchsia). Plus there was a Baskin Robbins readily available in the lobby.

Crown Cinema opened the West Ridge Mall 6 on Wednesday March 2, 1988, the same day that the mall had its grand opening.

The Wednesday opening was a promotional effort with Topeka TV station KTKA ABC channel 49, and featured six older moves at a price of 49 cents each. The movies were “Like Father, Like Son,” “Dirty Dancing,” “Throw Mama from the Train,” “Hello Again,” “Baby Boom,” and “Planes Trains and Automobiles.”

First-run features began on Friday March 4, 1988, but the only movie released that day was “Switching Channels,” which the theater opened, along with older titles “Satisfaction,” “Broadcast News,” “Fatal Attraction,” “Barfly,” and “Ironweed.” The older titles were quickly replaced over the next few weeks as new films were released.

Hollywood Theaters took over operation of the theater from Crown Cinema on Friday December 20, 1996.

An article by Michael Hooper in the Topeka Capital Journal newspaper on April 20, 2005, said the West Ridge 6 would close at the end of business the next day, Thursday April 21, 2005. “We just decided it was time to move on,” said Erica Reese, spokeswoman for Wallace Theaters of Portland, OR.

“It’s really sad,” said Martha Schultz, manager of the Baskin Robbins located in the theater lobby. “We’ve been here since the mall opened.” Schultz plans to have a pizza party Thursday night for the staff. She said 11 people would lose their jobs when the ice cream shop closes. Reese said she expected Wallace Theaters to retain the West Ridge 6 employees.

The article noted that “Earlier this month, Wallace Theaters opened a 14-screen megaplex theater at the Shops at River Hill, 1.6 miles north of the West Ridge Mall.”