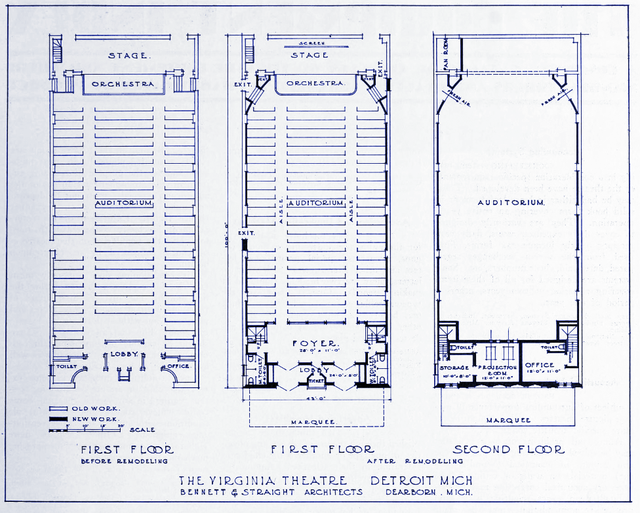 The Virginia Theatre was actually a remodeling job for Bennett & Straight. Before and after photos appeared in Boxoffice, February 8, 1936. The theater probably dated from the nickelodeon era, and was a neighborhood house located a couple of miles north of downtown Detroit. The theater originally featured the arched facade so common in earlier movie theaters, but Bennett & Straight’s remodeling gave it a nice Art Deco front. Boxoffice ran no photos of the interior.

The Virginia Theatre is gone. Even the address for the theater no longer exists. That section of Hamilton Avenue has been converted into a frontage road for the John C. Lodge Freeway. Google Maps will find the approximate location if the street name John C. Lodge is used instead of Hamilton Avenue. Google’s street view is from the freeway itself and shows only an earth berm.

The same address at Bing Maps will fetch a birds-eye view showing that the entire business district of which the Virginia was a part has vanished from the face of the earth. The theater was probably very near the corner of Virginia Park Street, thus the name.

Here is a fresh link to the photos of the Virginia Theatre in Boxoffice of February 8, 1936.