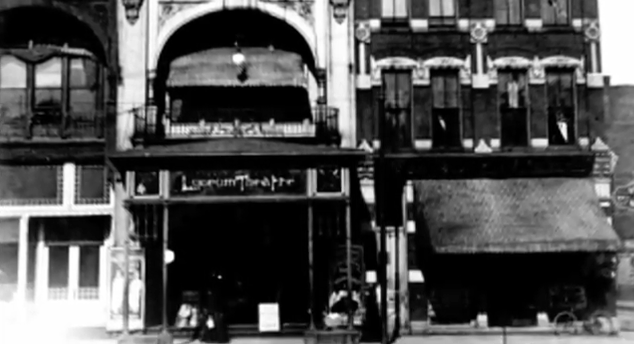 The Grand Opera House was built in 1886.

This theatre was already opened/or opened on Wednesday 24, 1901 so I am predicting it is currently demolished, and no info exists for it on search engines

Here is another photo showing the Lyceum from the Virtual Motor City/Wayne State University website.

The Caption says “New Detroit Theater” and dated 5-10-1911. You can just barely make out the name on the building.

There is a Lyceum Theatre listed under Detroit in the 1897-98 edition of the Julius Cahn Official Theatrical Guide. Is it this one? There are no street addresses in this Guide. It says that the Lyceum was managed by Brady & Stair, had 2,605 seats, and had both gas and electric illumination. The proscenium opening was 36 feet wide and the stage was 38 feet deep. Ticket prices ranged from 15 cents to 75 cents. Other Detroit theaters listed in the Guide were the Detroit Opera House, Whitney Grand Theatre, Capitol Square Thatre and Campbell’s Empire Theatre.

I believe both are the sme theatres. I have the Lyceum having been built in 1886, with 2,605 seats, designed by J. B. McElfatrick (who designed a lot of Boston theatres and playhouses). At one time it was also known as the Grand Opera House.