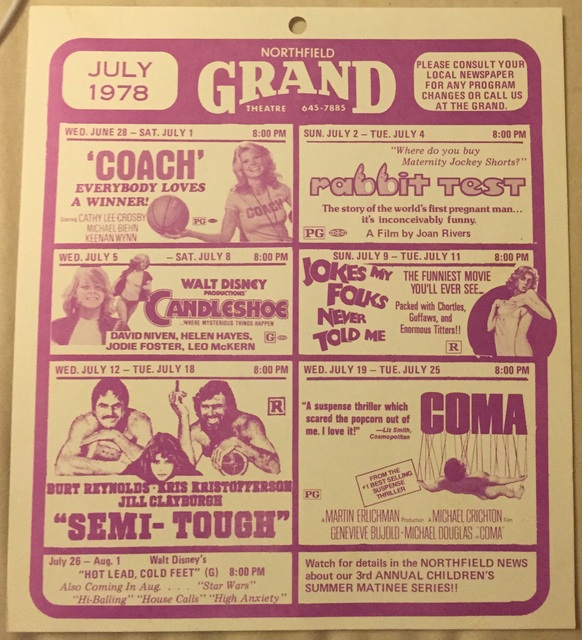 Opened December 26, 1899 as the Ware Auditorium. In February 1917 it was renamed Grand Theatre. Seating was listed at 650. The theatre was operated by Publix Theatres.

The Grand Theatre closed in June 1985 and is now a reception center.

An item in the January 12, 1927, issue of The Film Daily says that negotiations for the sale of the Grand Theatre in Northfield had been opened. The Grand was at that time Northfield’s only movie theater.

I know that the theatre didn’t close in 1957, at least not perminently. I have a calendar from this theatre from July of 1987 (in the pictures) and the historical timeline on the reception center’s timeline states “On June 30th, 1985, after 84 years, The Grand showed its final movie”. Of course, like many theatres (particularly small town ones) in the period between television and home video, it may have opened and closed several times but it doesn’t really sound like that either, given the timeline’s “after 84 years” bit. Also, according to the same timeline, it opened on December 26th, 1899 as The Ware Auditorium so this info should be added as well. I will copy and past the timeline in my next comment.

Again, perhaps it opened and closed -I’m just not sure. Unfortunately, I am a young guy working full time and already have a “to do” list consisting of literally hundreds of hours worth of my precious spare “theatre historian time” on this site adding thousands of theatre pictures, artifact pictures and town and/or theatre listings that simply do not exist presently so I just can’t take on any the research of any particular theatre as a pet project. I hope more people discover this site and more people step up to the plate along with all of us who work so hard as I think this site is inconceivably important. Think of how much history and how many theatre locations would be forever forgotten and how many theatre pictures and artifacts would either be seen only by their private owner or those who could attend the museum or other public location that they happened to be in, instead of it being as it is with Cinematreasures.org where any researcher from around the world who has internet access getting to enjoy and learn from them! Pretty darn important site so let’s all spread the word to help it grow and live on!

Here is the event center that’s located in the Grand’s website; it should be added to the listing’s website area as there is lots of historical info on it:

1904 The first talking pictures are demonstrated

February 5, 1917
The building changes it’s name from Ware Auditorium to The Grand Theatre

1947
A wide screen is installed

1989
The Grand is remodeled to become a fine restaurant

Timeline is credited to The Grand Event Center and their website from where it was extracted in full.

Here is an early photo of Ware Auditorium. A guidebook to Downtown Northfield (PDF here) says that the auditorium was designed in the Federal Revival style by Minneapolis architect Henry Carter.

Boxoffice, Aug. 20, 1955: “Northfield, Minn. - When a bus accident caused a missout on delivery of "Violent Saturday,” the Grand Theatre was dark for the first time in eight years, not counting Christmas Eve or Day."