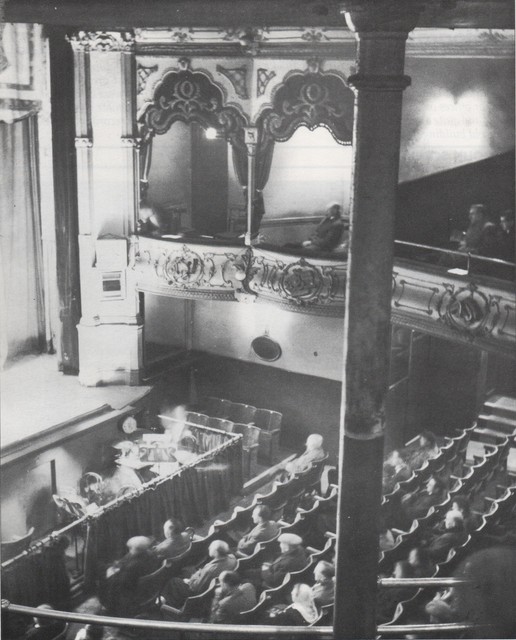 Located on Poplar High Street, between Cotton Street and Robin Hood Lane, in the east London suburb of Poplar. Originally opened in 1856 as a hall adjacent to the Queen’s Arms pub. It became the 800 seat Queen’s Arms Palace of Varieties and Public House. By 1863, ownership had passed to the Abrahams family, and they operated it for the remainder of its life. It underwent alterations by architect J.H. Good in 1867, and again in 1873 by Jethro T. Robinson. Later names were Apollo Music Hall, Albion Theatre, Oriental Theatre and Queen’s Music Hall.

In 1898, it was re-built to the designs of noted theatre architect Bertie Crewe. Seating was now provided for 921. There were 391 seats in the orchestra stalls, 271 in the circle and 279 in the gallery. There were four boxes on each side of the proscenium, and there was standing space for 439. Operated by Frederick Abrahams, it opened as the Queen’s Theatre of Varieties.

By 1910, it had been converted into a full time cinema, but with occasional live performances. In 1922, it was re-modeled again to the plans of Bertie Crewe and it ceased film use, possibly due to purpose built cinemas opening around the area.

It became the Queen’s Theatre, and presented plays upon its stage. Re-modeled again in 1937, to the plans of architect Thomas Baddock. It was closed in 1941/1942 during the height of the London blitz by German bombers. It then re-opened and continued as a live theatre. It can be seen in the 1951 British film “Pool of London” which featured both exterior and auditorium scenes. It was closed in 1958 and stood empty until it was demolished in 1964. The immediate area has been redeveloped.