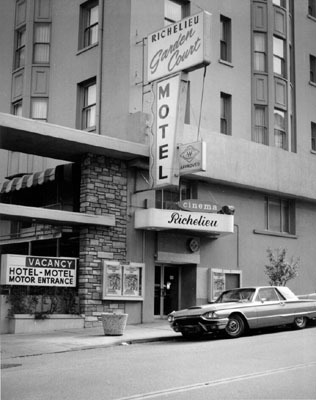 Over the years its policy was mostly foreign and revival programming, employing a rear-view projection system in which the projector is located behind the screen, and the image is thrown upon the screen by the use of a mirror.

My wife and I went to SJSC in mid-1960’s. Great time for foreign films and theaters. There was a Russian (or Eastern European) film we remember. Mid-1960’s. About an old couple. We saw at Richelieu in The City. Can you remember the film and title? May have had “sun” in the title. Is the Richelieu' owner still around?

I was friends with Piers Freeman, who was a employee there in the 70’s. Saw many a movie there. Miss it very much.

Jack Tillmany’s program of revival and classic movies at the sibling theaters Gateway and Richelieu was a hallmark of San Francisco in the 1970s. If memory serves, Jack was one of the theater owner/exhibitors who convinced the studios to cut new prints of old classics, leading to a rebirth in appreciation of Hollywood’s Golden Age by mainstream viewers.

The Richelieu met its slow demise when some protesters (allegedly students from UC Berkeley) smashed the glass projection screen during short run of the AFI restored BIRTH OF A NATION. I saw it two days earlier. To recoup the money for the repair ($10,000? $20,000? I know it was a lot), Jack introduced a series of more recent classics which were very popular. It was unusual to see classic Connery James Bond adventures on the big screen, along with many others. Gateway “member” cards got you big savings on tickets and refreshments, and on closing night at the Gateway cardholders were allowed in as family and friends. It was a sad night, but a great opportunity to applaud Tillmany.

The Richelieu screened the less popular, more obscure selections that would be lost at the Gateway. Hence, this little theater was a portal to seeing old movies you otherwise would never see on TV, in the days before home video.

BTW, does anyone remember getting some homemade sweets from Findley’s Fabulous Fudge at 1035 Geary before a show? I know, theaters kept afloat on refreshment sales, but Findley’s was soooooo good.

As a film student at SFSU, I often went to this cinema. The place was great, and I loved the Black & White prints.

Worked there and over at the Gateway in summer of 78 and through winter 79. Great memories working with the crew and of Jack Tillmany who would come in and spin stories about the great days of Hollywood. The back office was cramped and stashed with bits of movie memorabilia that would be used for display. Many interesting customers would come in and share their love of cinema. Recall while working the Gateway on night, Rock Hudson and his entourage was dining at the popular restaurant across the street. Took a break and got the opportunity to meet him. Gentleman all the way. Tall too.

I’d forgotten about Findley’s Fabulous Fudge! Personally, I was more of a popcorn guy, with a Zimburger, chocolate malt, and apple pie upstairs at Zim’s after the show.

After some delays, this opened on March 13th, 1963. Grand opening ad in the photo section.

At one time, my parents and I lived in an apartment above the garage across the street and the musicians union. I saw some movies at the theatre but Finley’s Fabulous Fudge had the best fudge ever !

I worked downtown at Flax Art materials on Sutter in the 70s. Liked to catch a film here via thr walk home (Tenderloin) from work. This where I first saw DOA. “I’m gonna give it to you in the belly, Bigalow! You’re gonna like it in the Belly!”. A little seedy up there - perfect for Film Noir. Sorely miss it.

I worked downtown at Flax Art materials on Sutter in the 70s. Liked to catch a film here via thr walk home (Tenderloin) from work. This where I first saw DOA. “I’m gonna give it to you in the belly, Bigalow! You’re gonna like it in the Belly!”. A little seedy up there - perfect for Film Noir. Sorely miss it.