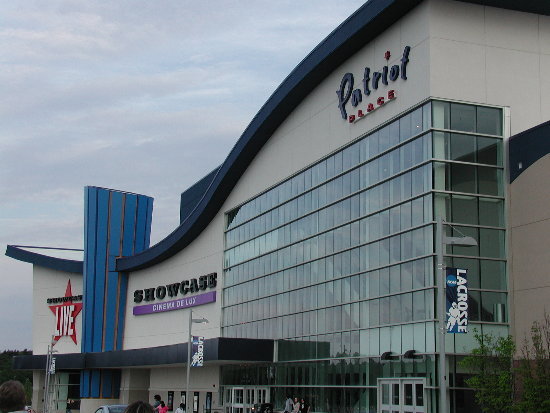 Located in a shopping center near the home of the New England Patriots NFL team, this theater has 14 screens as well as a restaurant and other amenities.

Showcase Live! has announced that it will be closing on December 31st. No explanation was given. The Boston Globe reported that musicians received an e-mail canceling all bookings after Dec. 31 and asking if they would like to reschedule their dates before the end of the year.

According to Boston Gerald, Showcase Live had a hard time with competion from CT casinos, Boston & Sputh Shore Music Circus.

According to Architect, the magazine of the AIA, the entire Patriot Place complex, including the cinema, was designed by the Boston architectural firm Arrowstreet, Inc.

Arrowstreet designed several multiplexes for Hoyts America from the mid-1990s until 2003, when most of that circuit’s locations were sold to Regal Entertainment.

There is a conflicting claim about the design of this theater. Two photos of the Patriot Place Showcase Cinemas De Lux appears on the web site of the Philadelphia architectural firm SPG3. A brief biography of architect Irving Shapiro (the S in SPG3) says this about the firm’s relationship to National Amusements:

“In 2000, spg3 was engaged by National Amusements, the parent company of Viacom and CBS. Mr. Shapiro worked closely with the president of National, to create a new experience for their cinema patrons worldwide. Between 2000 and 2008, National reinvented their brand and brought the concept of Cinema de lux to new buildings throughout the United States, Russia, Argentina and the United Kingdom. In the UK projects, the cinema was the entertainment anchor for several of the largest ‘urban regeneration’ projects being contemplated in Europe. The initial planning was done in collaboration with several acclaimed international design firms, including Foreign Office Architects, Chapman Taylor, Cesar Pelli and Westfield Architecture. In Moscow, the work was done in collaboration with Callison and IKEA’s in house design professionals.”

Apparently, SPG3 designed all of National Amusements' Cinema De Lux projects, even when the larger developments of which they were a part, such as Patriot Place, were designed by other firms, such as Arrowstreet. Arrowstreet did design a number of projects for Hoyts America, though, and SPG3 has designed some theaters for other chains.

“Mr. Shapiro acted as the Executive Architect for General Cinema from 1995 through 2000. During this time, spg3 was responsible for all new General Cinema design and construction.”

Sowcase Live is still open and thriving with good entertainment. Right next to Showcase Cinemas and close to the CBS SCene.

This opened on August 8th, 2008. Grand opening ad in the photo section.