I’m getting old and my memory is poor. I believe it was 83 and 84 I managed the Fox. It was a 3 Plex at that time and I don’t recall playing any 70 mm film. I did have the second run of raiders and it was in Dolby surround. The union projectionis ran the booth and I only ran the projectors when they didn’t cover a shift. In all my management years I only recall running one 70 and that was the world premier of ET at Mann’s Christown in Phoenix Arizona

I’m curious what years Tosh managed this theater because there appears to be credible evidence this venue did have the capability to run 70mm prints. While 70mm projection is not touted in the theater’s grand opening advertisement, it is listed as a 70mm-equipped theater in a late 1960s Norelco (projector manufacturer) trade ad as well as in 1980s era Dolby install records. Plus, more tellingly, at least a dozen movies were promoted as a 70mm presentation in the Austin newspaper during the 1970s & 80s including “Brainstorm,” the first two “Indiana Jones” movies, and revival runs of “The Sound of Music” and “2001.” The last known 70mm presentation here was, I believe, “Silverado” in 1985.

The Palms was torn down and replaced with a high-rise. The Maryvale is gone too

Thank you! I wonder if any of those are still open… I certainly will do some research and thanks for the post!!!

Maryvale, metro 8 , Mann’s Christown and the one with great curtains was the Palms Theatre , an old single screen downtown Phoenix

Great theater, the Fox in Austin, before it was divided in half. Always a wonderful presentation. Curious to know what theaters in Phoenix you managed.

You know what’s bad is I managed that theater for a couple years in the 80’s and I don’t remember the curtains. I had a couple theatres in Phoenix with wonderful curtains and I agree they made it special

Thanks for the great ad! Those were the days, the huge curved screen with those incredible curtains. Opening the curtains was so terrific, and contributed to a real “sense of occasion.” 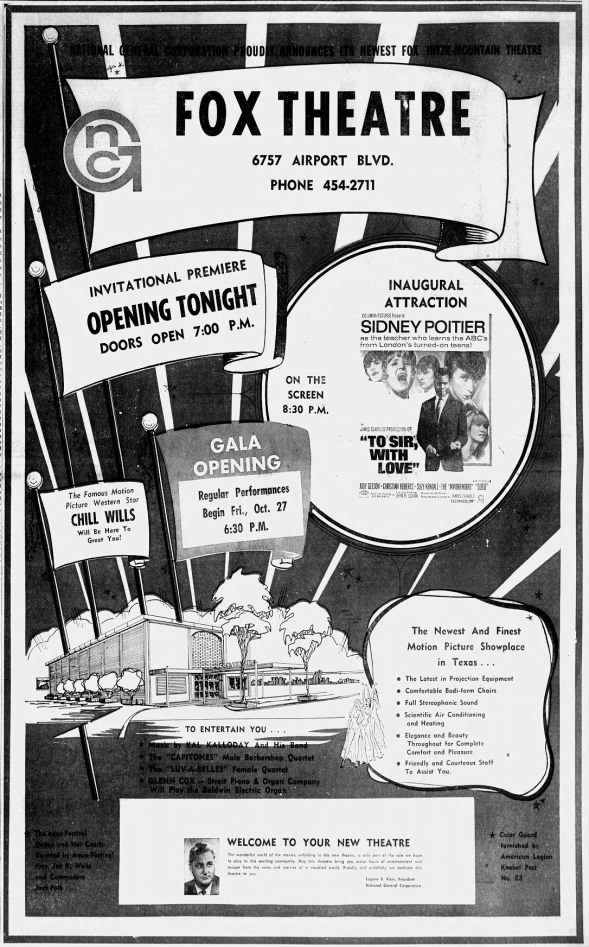 I remember seeing a few films here, including a re-release of The Sound of Music. It was a pretty nice theater as I recall, and in later years I saw The Right Stuff and Krull here. There must have been a water leak in those later years, because I recall smelling mildew… not particularly pleasant.

Thanks for the comment! I have fond memories of that theater. I can remember seeing KRAKATOA EAST OF JAVA, YOURS, MINE AND OURS, BARRY LYNDON, and SUPERAN. The large curved screen would have been fantastic for 70mm.

Does anyone recall if this theater was equipped with 70MM?

To Scott, yes, they kept part of the building. Not sure how much because of the added features. See this link. http://www.slackerwood.com/node/3877

Does any part of the theatre still stand at the site of the Mercedes dealership?