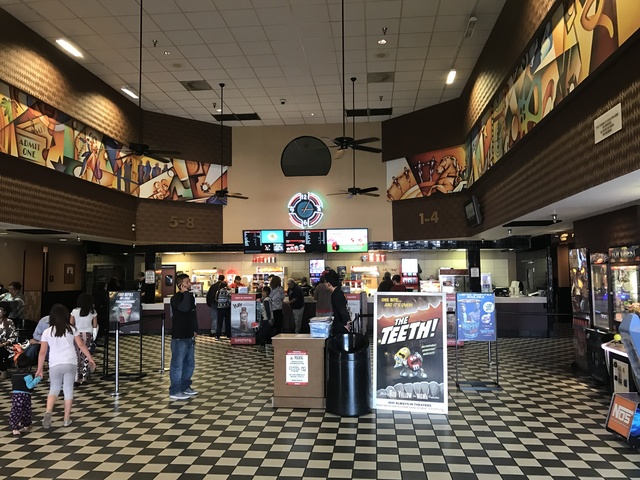 Built by Rand Theatres in 1989, but they never opened it. It was opened December 14, 1990 by Cinemark. This theatre is large for a second run theatre. One night a week (Mondays I think) they have $.50 day. Awesome!

It was closed on March 16, 2020 due to the Covid-19 Pandemic. In June 2020 Cinemark announced they would not be reopening the Movies 8 due to its lease expiring. It was taken over by Icon Cinemas in September 2021 and renamed Icon Cinemas San Mateo NE, with a Grand Opening on April 22, 2022.

this has the same design as the UA Movies at High Ridge 8. Did one of these two theatres had different owners when they opened?

This was built by Rand Theatres of Little Rock, AR along with the Movies West as well as the High Ridge in 1989 but it never opened. It opened on December 14th, 1990 by Cinemark as a discount cinema. Its grand opening ad can be found in the photo section for this cinema.

Sadly during in June when Cinemark announced that they will be reopening their theaters in July, they will not reopen this theater due to the lease about to be expired

Actually the deal with Green Suites Hotel Solutions didn’t go through well and the Dion’s Pizza company just purchased the old It’z building for “Flagship” Campus don’t know what’s going to happen to Movies 8 now since the deal is off.

Icon Cinemas just brought this building and will be reopening this theater by late-November and early-December.