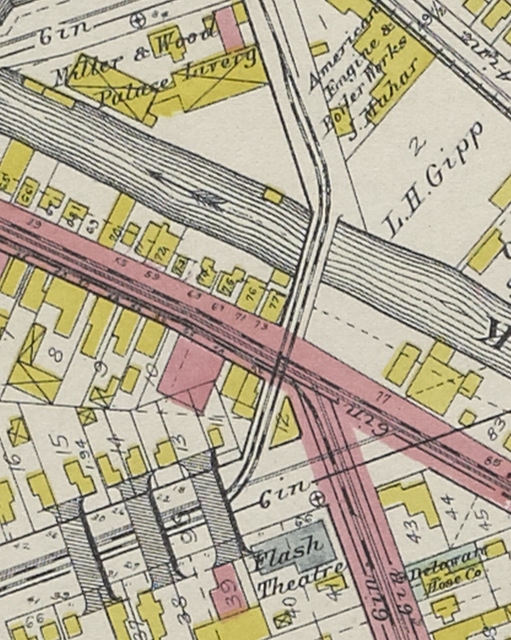 In a comment for the nearby Star Theatre LOUB wrote that there used to be a theatre at the corner of Delaware Street and Broad Street right next to it.

I spoke to the pastor of the Bethesda Full Gospel Church at 12 Delaware Street (on the corner of Broad Street) and he confirmed that their building was once a theatre and said it was called the Flash Theatre.

The Flash Theatre was not listed in the 1914-1915 edition of American Motion Picture Directory, but it was open by at least 1917.

There is a photo of the auditorium of the Flash Teahtre at the bottom of page 113 of the Arcadia Publishing company’s “Images of America” book Tonawanda and North Tonawanda (Google Books preview.) This was a good-sized theater, probably at least 500 seats, with some very nice decorative detailing. The caption says the house was built in 1914, and in later years was converted into a roller skating rink and then a bowling alley before becoming a church.

An article about the opening of the Flash Roller Rink, located in the former Flash Theatre building, appears in an issue of the North Tonawanda Evening News that I would guess is from 1929. The date on the scan is unreadable, but the page has an article commenting on Herbert Hoover’s inaugural address, so it was probably from March, 1929. It’s possible that the Flash Theatre closed in 1927, though. I haven’t found any ads for it after the early part of that year. The opening of the Riviera Theatre at North Tonawanda in late 1926 might have left the area with too many theaters.