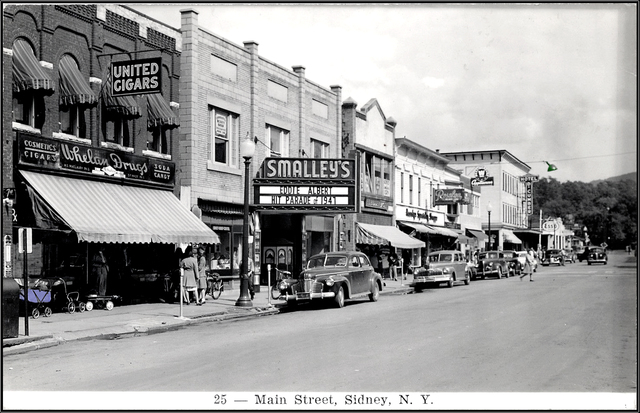 Smalley’s Theatre opened in 1922 and was still open in 1957. Later renamed, the Sidney Theater underwent extensive remodeling in late-1969, including removal of the old marquee.

The cover of the Images of America book Sidney, by Erin Andrews and the Sidney Historical Association, has a photo of this theater on its cover with the name Smalley’s on the marquee (Google Books Preview.) There’s also a photo of the auditorium in the book, the caption for which says the house opened in 1922 with 880 seats, was sold in 1957, and operated as a theater until 1997.

this web page extracts a bit about the theater from a 2002 publication. It gives the exact opening date of Smalley’s Theatre as September 21, 1922, and adds that, as of 2002, the building was being partly demolished, but doesn’t specify which part. The Images of America book says that the building is now occupied by the Emerald City Salon and Joe and Vinny’s Pizzeria.

Google Maps' pin icon is in the wrong place again. The theater building is on the east side of Main Street between Liberty and Avery Streets, almost directly opposite the end of Division Street. In satellite view it looks like the whole, theater-sized building is still there, though it’s possible that a stage house has been removed.