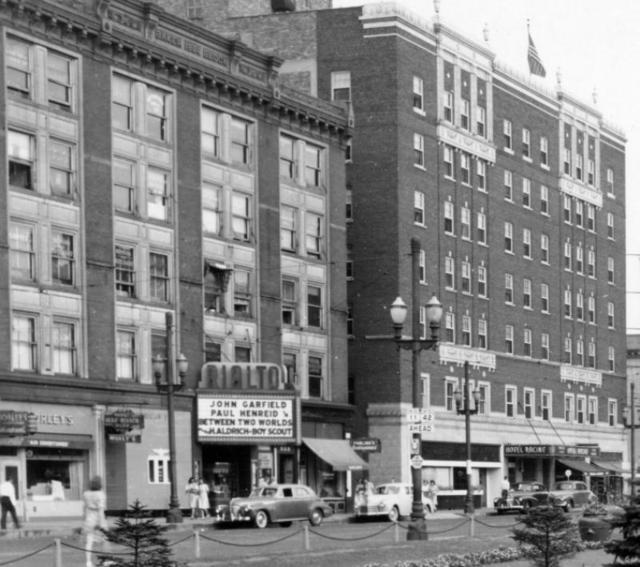 The Rialto Theatre opened September 21, 1918 with D.W. Griffith’s “The Great Love”. The theatre was operated by Warner Brothers and later by Marcus Theatre.

The Rialto Theatre closed August 1, 1971 with “101 Acts of Love” and was later demolished. There is an office building where the theatre once stood.

HUBERT J. SOENS, formerly of 10 McKlnley Ave. passed away at 83 in the West View Nursing Home on Friday evening, March 28, 1975. Mr. Soens was born in Racine on Nov. 2, 1891 and had lived there all of his life. In Racine in 1929 he married the former Mabel Johnson. Mr. Soens was a motion picture operator for the Rialto Theater for many years. Surviving him were his wife, Mabel; three daughters, Doris Thuriat of Racine, Isabelle Hyder of Long Beach, Cal., and Florence Bouterse of Kenosha; one brother, Aloys Soens of Kenosha; two sisters, Mrs. Rose Andersen and Mrs. John Olsen, both of Racine; grandchildren, great grandchildren, nieces, nephews and other relatives also survive. Private funeral services were held in the WILSON FUNERAL HOME, 1139 Blaine Ave., Wednesday, April 2, 1975 at 10 a.m. with Rev. George Overdier. Interment in Mound Cemetery. There was no visitation.

Here is an advertisement for the Rialto Theatre from Racine, an Historical Narrative, published in 1920.

I used to live at 826 Lake Ave. (now torn down) in Racine back in the early 60’s. I used to go to the record store that was next to the Venetian Theatre where I purchased my 1st Beatles “Meet The Beatles” lp in 64'. I also saw ‘A Hard Day’s Night" at the Rialto Theatre. When I find my original ticket stub for the movie I’ll up-load a scan of it.

I went to Franklin Junior High. I was in my 7th grade classroom when the principal got on the intercom and announced that president Kennedy was shot. We all got sent home.

September 21, 1918 grand opening ad in photos. The Rialto showed X-rated films in its final years but was forced to close unable to get a new license to operate from the Racine City Council. The last week was an adult film festival with the final showing on September 2, 1974 with Marilyn Chambers in “Behind the Green Door.”

In January of 1978, the theatre was demolished by Sam Azarian Wrecking along with the Venetian for the Racine Motor Inn expansion project that didn’t utilize the properties.