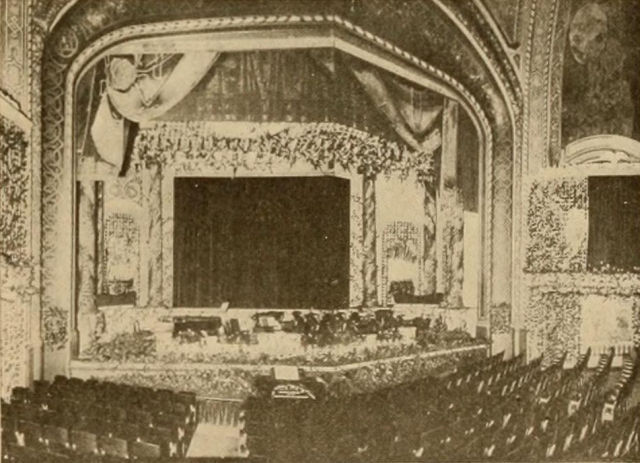 Built at a cost of $400K the Broadway-Strand Theatre opened January 26, 1913 with a huge fanfare. The theatre seated 1,600 and boasted many amenities. This was silent era movie palace. From 1926 and into 1927 it was operated by the Universal Pictures chain.

The name was then changed to Broadway Theatre and it closed in 1929 and was soon demolished.

The Broadway-Strand Theatre was designed by architect Arland W. Johnson. It opened January 26, 1913, with 1,488 seats, according to Andrew Craig Morrison’s book Theatres. A drawing of the house as the Broadway, by artist Anthony F. Dumas, was dated 1931, but I’ve been unable to find a copy of it on the Internet. I don’t know if the theater was still in operation at the time the drawing was made.

In the first comment at the Strand Theatre (Detroit) page, ken mc mentions finding a reference to a lawsuit involving the Broadway-Strand in the late 1920s. I think this theater might have been called by its original name until only a year or two before it closed. I’ve been unable to find any period references to a Broadway Theatre in Detroit other than the 1931 drawing by Dumas, and I’ve found only retrospective references to the Broadway-Strand after 1927.

I did find a 1922 reference saying that the Broadway-Strand Theatre had been built by Max Bartholomaei, Son & Company, building contractors.

There is also this photo from Wayne State University’s Virtual Motor City collection. It had a very nice Beaux Arts-Renaissance Revival facade.

What a waste to tear down this dramatic building.

An Broadway Strand opened on April 11th, 1915 at 35-41 Broadway. Grand opening ad in photo section as well as

It now appears that this house opened as the Broadway Theatre in 1913 and the name was changed to Broadway-Strand Theatre in 1915, per the article linked by rivest266. It was also probably 1915 when a Wurlitzer Hope-Jones Unit Orchestra was installed in the Broadway-Strand. The instrument was featured in an ad for the Rudolph Wurlitzer Company that appeared in the August 14, 1915, issue of The Moving Picture World (scan at Google Books.)

I’ve come across a couple of references to burlesque shows running at the Broadway Strand in 1928. That may be why I’ve found no references to the house in movie industry trade journals after 1927. The theater probably closed as a burlesque house.

Two decent photos of the Broadway Strand can be found on this page at Water Winter Wonderland.

I recently found this one page article from the December 11, 1915 issue of MOVING PICTURE WORLD (pp.2001) entitled: STRAND THEATER, DETROIT, MICH. Kunsky Adds Another Photoplay House to His Growing Chain of Picture Palaces—Song Birds in Wicker Cages a Novel Feature. includes a couple of nice photos.

Klaus, that’s a great article, but it looks like it is about the Strand theater at Grand River and 14th: http://cinematreasures.org/theaters/4120