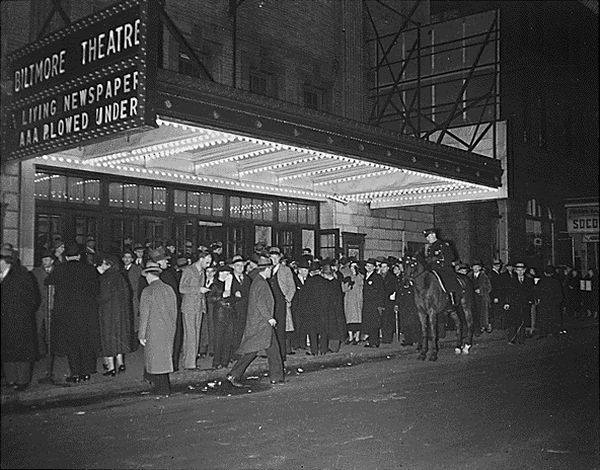 One of six legitimate theatres built by the Chanin Brothers, the Biltmore Theatre opened on December 7, 1925. It has one balcony. The historic Soviet-era film "The Battleship Potemkin", with live orchestral accompaniment, premiered in December, 1926, and was presented on a reserved-seat basis. "The Battleship Potemkin", one of the greatest of cinema classics is the acme of the career of director Sergei Eisenstein, and unveiled his sophisticated editing techniques which were to revolutionize the industry. Landmark plays presented here include "Brother Rat", "My Sister Eileen", "Kiss and Tell", "No Exit", "The Heiress", "Billy Budd", "Barefoot in the Park", "Hair", and "Deathtrap".

The Biltmore Theatre was little used in the 1980’s and was sold to a developer. In December 1987, just two days after the interior had been given Landmark designation, arsonists set fires on the stage and inside the auditorium. Vandalised over the following years, the theatre was declared unsafe.

In 1993, the Biltmore Theatre was purchased by the Nederlander Organisation, but after four years of inactivity, they sold it on. It was eventually renovated in 2006, and the Manhattan Theater Club has produced the theater’s offerings since then.

I wouldn’t consider this a cinema just because they played one film there.

The a large number of the remaining Broadway theatres have had some film in their history but have yet to be added to the CT roster.

My wife and I saw a play here earlier today. The theater is in wonderful shape and is a great place to see either a play or a movie. Due to the recent renovation, the capacity has been reduced to 650. The additional legroom provided was especially appreciated by this long limbed person.

Although the American premiere of the Potemkin was clearly a notable – even an historic – event, I agree that this lone cinematic experience provides a pretty thin justification for the inclusion of this theater on this site. Still, since this was an event that should clearly be noted – and even celebrated – in CT, unless some separate recognition can be provided, I would keep it in.

That was a fascinating post, Tinseltoes, that clearly underlines the problematic nature of devoting a page to this theater. (Also, given the fact that only the Biltmore ever hosted a movie here and that the Friedman, with its really deep stage, will very likely only be a live theater venue, the name should definitely be changed to the Biltmore if it is not removed from this site.)

This also brings up the question of including venues that only host occasional cinamatic events. I noticed that, at least for now, there is no CT page dedicated to Alica Tully Hall, even though this theater, for several weeks each year, hosts one of this country’s most important film festivals. Certainly, if we are to include the Friedman/Biltmore, we must do the same for Tully Hall. But where should we draw the line?

The interior of the Biltmore Theater in Manhattan, which recently received landmark designation, was damaged by fire early yesterday in a blaze that officials say was deliberately set.

At about 2:30 A.M., firefighters responded to an alarm set off by a sprinkler system at the theater, at 261 West 47th Street. Firefighters found the stage and a portion of the orchestra seating ablaze. Heat damaged the ornate plaster ceiling, sending some slabs falling 60 feet to the floor.

“The chief at the scene has deemed the fire suspicious,” said a spokesman for the Fire Department, Lieut. Frank Martinez. “There was a flammable substance poured onto the stage.”

According to the police, there is evidence that someone broke into the 948-seat theater, which has not been used since the musical “Stardust” closed in May. Hypodermic needles were found inside the theater, indicating that drug users may have been using it as a shooting gallery, and storage lockers had been rifled.

No one was seen fleeing the building at the time of the fire, said a Police Department spokesman, Det. Joseph K. McConville.

Lieutenant Martinez said, however, that there has recently been a problem with vagrants and squatters breaking into the building.

One month ago, the city’s Landmarks Preservation Commission designated the interior of the 52-year-old theater as a city landmark, protecting it against demolition or alteration. The commission praised the Biltmore’s detailed and refined neo-classical architecture.

The commission is still considering designation of the exterior of the theater.

Lillian Ayala, a spokeswoman for the Landmarks Commission, said that despite fire damage, the building’s interior would retain its protected status. Any reconstruction would be reviewed by the commission.