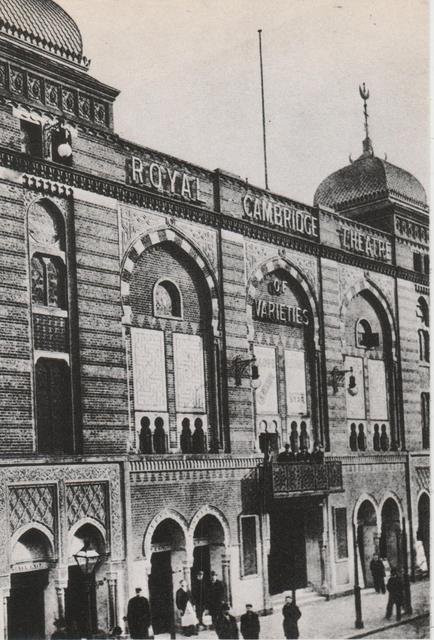 A new theatre was built on the site, designed by architect D. Harry Percival, opening as the Royal Cambridge Music Hall in 1898. Seating was provided for 1,306 in the pit and stalls, 280 in the circle 313 in the gallery and there were several boxes, which had a total capacity for 24. The stage was 41 feet wide and 30 feet deep. A year after opening it was re-named Royal Cambridge Theatre of Varieties.

By 1910, it had been re-named Cambridge Theatre of Varieties, and was screening films as part of the variety programme, and this lasted until at least 1915. It continued as a variety theatre until November 1924, when the licence had not been renewed.

The Cambridge Theatre of Varieties lay empty and unused until 1936, when it was demolished and an Art Deco style extension of the adjacent Godfrey & Phillips cigarette factory was built on the site. In 2008, this Art Deco style building is in use as ‘The Rejuvination Centre’.

History and photographs of the Royal Cambridge Theatre here;
http://www.arthurlloyd.co.uk/shoreditch.htm#royal