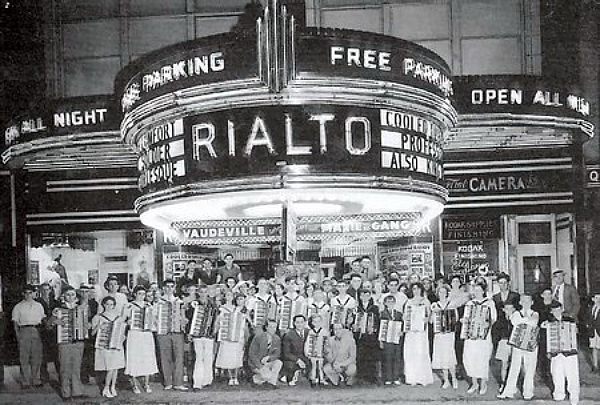 The theatre opened on August 29, 1935 as the Rialto Theatre with seating listed at 565. It was operated by Associated Theatres. On September 1, 1961 it was renamed Theatre Royal screening foreign movies. It later went over to screening adult movies.

I managed the Royal theater when it had changed from the Rialto. It was an open all night theater and drew the gay audience. When it was the Rialto they had Vaudeville shows and later talent stage shows. It was long and narrow. It had a nickname the Rathole, because they claimed rats came into the theater from the back alley. I never saw any.

It had been remodeled with new seats and carpet in the lobby and aisles. The entrance was also made over and it was a clean theater and got over the rathole name calling. It was still open all night and they even had “THE HUSTLER” with Jackie Gleason and Paul Newman first run. I left to operate the book store next door, Le Stag Shoppe. When the downtown Flint died with ten large businesses moving out to the malls, the Royal lost their lease. They opened a store front theater a block away and exhibited porn films. Now that too is gone.

The Water Winter Wonderland page for the Savoy says the theater opened in 1908. A Savoy Theatre at Flint suffered a fire on May 13, 1913, according to a list of theater fires in the September, 1913, issue of Safety Engineering. It didn’t reveal the extent of the damage, but if it was considerable and substantial repairs had to be made, that might explain why the theater was called the New Savoy for a while.

The Savoy Theatre is listed at 302 S. Saginaw in the 1915 and 1922 Flint city directories. I don’t know if the lot was later renumbered, or if a new theater was built on a nearby site.

Interestingly, the 1915 directory also lists 302 S. Saginaw as the office of George J. Bachmann, under the category Theatre Contractors. Bachmann, an architect, designed several theaters in Flint and other Michigan cities. Another page of the 1915 directory lists him a second time, as an architect, with offices in the P. Smith Building, which was across Saginaw Street from the Savoy. I don’t know just what to make of the dual offices and dual professions, but it suggests that Bachmann might have designed the Savoy and might even have been its owner, or part owner.

I do remember the Royal Theatre in the very early ‘70s when my best friend’s mother worked there as a ticket taker in the booth out front. The owner at the time was Nate S and his son was a pretty good friend of ours, Larry S, who was the projectionist at the time. I remember when “Deep Throat was showing. It was very controversial. At the time, Nate also owned a bar on Flushing Rd. It was very interesting to be able to see this side of life. My friends mother did not sugar coat her job, she painted a clear picture…the Royal Theatre was a seedy place

Demolished in 1977 for the 10 story Citizen Bank North Building, completed a year later. The building today is used by University of Michigan-Flint and is called University Towers.

This was renamed Royal on October 5th, 1912 and renamed to New Savoy on November 20th, 1919. Grand opening ads posted.

This reopened as Rialto on August 29th, 1935. Another ad posted.