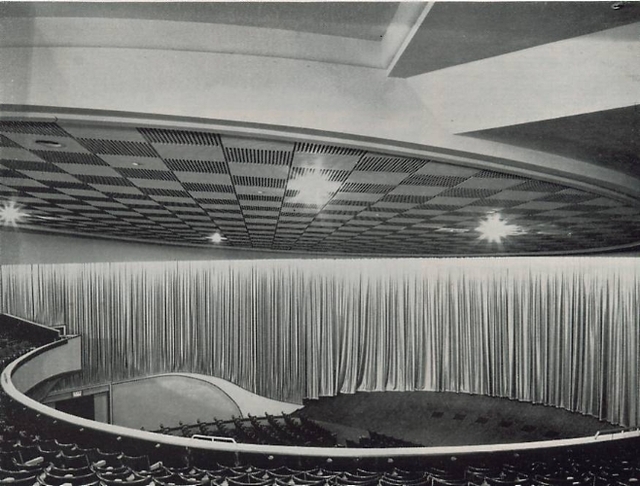 The Glasgow Coliseum Theatre is located on the south side of the city centre in the district of Laurieston. It was built for the Moss Empire’s theatre circuit and opened on 18th December 1905 as a 2,893 seats music hall/variety theatre. It was designed by the most prolific UK theatre architect Frank Matcham. There were two balconies and a 36 feet deep stage. It began cinema use from 1925 when it was sold to Associated British Cinemas(ABC), and in January 1929 was the first cinema in Glasgow to screen ‘talkies’ when Al Jolson in “The Jazz Singer” played here.

In 1931 it closed for major alterations by ABC’s in-house architect William R. Glen and the new decoration was in a ‘Jazz Moderne’/Art Deco style. The seating capacity was increased to 3,094. The original marble proscenium arch was removed, the orchestra pit filled-in, and the large stage was removed, the seating was extended into this area.

In 1962 the upper balcony seating area was demolished and the front of the dress circle was partially removed to allow for the installation of 3 separate Cinerama projection boxes in the rear stalls. The stalls and first balcony only were now in use, and the seating reduced to 1,310. There was wall-to-wall curtains and a new lower ceiling installed. The screen was 90ft wide, said to be the largest in the UK. All this was designed by architect Leslie C. Norton. The first programme in Cinerama was “How the West Was Won” which opened on 26th September 1963.

After Cinerama films dried up, the ABC Coliseum reverted to normal programming but closed on 11th October 1980 with Jack Nicholson in “The Shining”. A Compulsory Purchase Order was made to allow for a new road scheme. This never happened and the building stood empty for several years until the County Bingo Hall was established here in 1987 - further altering the interior.

The bingo hall created a new inner shell within the auditorium, but there were apparently still substantial remains of the original decorations hidden from view. The County Bingo Club closed in January 2003 and since then the building remained empty and unused.

On 17th June 1986, Historic Scotland designated the Coliseum Cinema a Grade B Listed building. It was also listed on the Buildings At Risk Register.

At 01:30am on the morning of 25th May 2009, 60 firefighters fought a loosing battle with a blaze that seriously damaged the former Coliseum Theatre building. The remains of the Coliseum Theatre was demolished a couple of weeks later, in early-June 2009.

Some slight clarification to the history of the building – it originally only had two balconies, not three. The alterations in 1931 also involved the building of an entirely new proscenium and projection box at the rear of the top balcony, and were carried out by W.R. Glen.

The 1963 Cinerama conversion involved the removal of the front half of the top balcony, the remains of which were hidden aboved a false ceiling. For Cinerama, therefore, only the stalls and first circle were used, with an entirely remodelled interior, mostly using curtained walls and a false ceiling.

I should also add that the spell of dereliction in the 1980s before becoming bingo meant that even the 1960s Cinerama interior had to be replaced, with new splay walls and a simpler false ceiling.

Like Lilli, we recently surveyed the interior, and were dismayed to find that most of the Matcham plasterwork had not survived above the later alterations, as had previously been thought, although the shadow of some decoration is still visible on parts of the ceiling.

We were also unable to get access to the balcony staircase, where some original painted glass survives, as photographed by the Royal Commission on the Ancient and Historical Monuments for Scotland website, here:

The link to our webpage on this cinema, as posted by Lost Memory above, has changed, and you can now find our latest material here:

As well as the recent survey images, you will also find a 1911 programme, a photograph of the Cinerama interior and a link to a newsreel of the Cinerama opening on the British Pathe website. Keep checking back, as we have also recently been gifted a series of archive images showing the fairly heavy alterations in progress when County Bingo took over in the 80s, including the new walls, floors and ceilings in the auditorium, and the removal of the 1930s projection booth, and these will be added shortly.

Another photo of the tower here:–

And a photo of the ABC with the Cinerama title on the front here:–

A vintage photograph of the ABC Coliseum Cinerama Theatre, taken in October 1963, a month after conversion to Cinerama:
View link

The owners of these historic buildings need to be taken to task.This is the second building recently to be allowed to rot and fall prey to serious damage – following Derby Hippodrome.

The coliseum was 80% destroyed by an dawn blaze a few weeks ago and it is now expected to be demolished within months.

I can see no reason why the tower and facade couldn’t have been retained other than people taking the lazy, easy option of complete demolition.

The opening of the ABC Coliseum Cinerama in 1963:–

At 90' this was the widest Cinerama screen in the UK

It showed DOCTOR ZHIVAGO for a long period of time in late 1966, probably into 1967.

Very impressive on its nig screen.