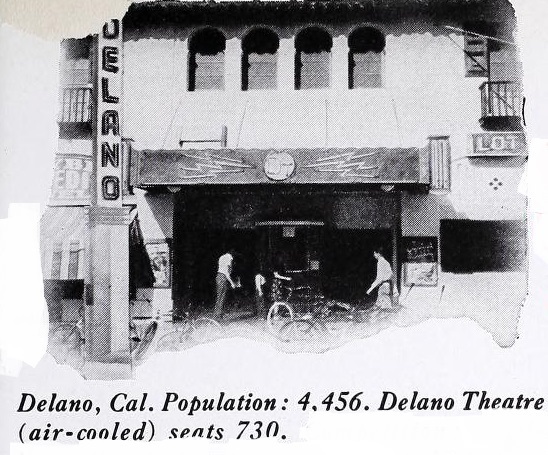 The Delano Theatre opened on April 13, 1926 with seating given at 730. It was operated by Frank Panero.

The theatre closed in 1955, but was later reopened. It was given a new moderne style facade in 1971 and was still operating as a movie theatre in 1982. Building still standing with a ‘For Lease’ sign on the front.

Here is the Delano in 1982:
http://tinyurl.com/yaqeedg

Boxoffice of April 5, 1971, said that a new facade was being built at the Delano Theatre. It was the final step in a multi-year renovation project which had brought the theater new seats, wider aisles, a new sound system and projection equipment, and an new air conditioning system.

I also suspect an opening year of 1924 for the Delano Theatre. Southwest Builder & Contractor of February 29, 1924, said a theater was being planned at Delano as part of the proposed Grower’s Security Bank building, then being designed by Bakersfield architect Charles H. Bigger. An ad for Paramount Pictures in Boxoffice of September 7, 1940, includes tiny photos of the Delano Theatre and the Wasco Theatre along with a photo of operator Frank Panero.

The photo of the pre-remodel Delano shows a building with arched windows characteristic of the 1920s but pretty much out of style by 1930. There is also a letter from Frank Panero indicating that he had been in the theater business for 25 years. The circuit having been headquartered in Delano suggests that the Delano could have been the Panero’s first theater, as its likely opening date of 1925-1925 would have been about the time they got their start.

Trade Journal The Moving Picture World of August 7, 1915, said that Frank Panero was opening the Delano Theatre at Delano, California. The Delano Theatre was also mentioned in a journal called News Notes of California Libraries, in April, 1917, when it hosted an event to raise funds for a site for a library in Delano.

Now I don’t know if the current Delano Theatre is in this 1915 building, or if the house later moved to the 1924 building mentioned in the second paragraph of my previous comment. The link to the picture in Boxoffice is no longer available on the Internet, but if memory serves, the building in that photo was of a style that was being built in the 1910s as well as the 1920s.

The small 1940 photo of the Delano Theatre in Boxoffice is online again at this link.