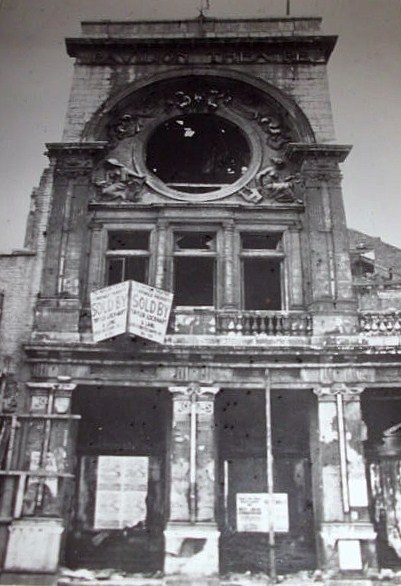 Located in the east London inner city district of Whitechapel. Originally opened as the Eastern Opera House on 10th November 1828. The building burnt down on 13th February 1856. It was rebuilt in 1858 to the plans of architect G.H. Simmonds, with the capacity given as 3,000, 2,000 of which were located in the pit area. There was a series of boxes at both stalls-circle level and dress circle level, with a huge gallery above. The stage was 70 feet wide and 58 feet deep. It was known as the New Royal Pavilion Theatre.

The building was reconstructed to the plans of noted theatre architect Jethro T. Robinson in 1874. It had a narrow street frontage on Whitechapel Road, which was adorned by Corinthian columns. The rear of the building (stage end) backed onto Vallance Road. There were now 174 seats in the stalls, 436 in the pit, 417 in the dress circle 690 in the gallery and boxes which seated a total of 85. There was standing room for 848. The dress circle and gallery were supported by a series of iron columns.

Now known as the Pavilion Theatre it was one of the main theatres in London presenting a Yiddish/Jewish programme. Lavish pantomimes were also staged here. Further major alterations were carried out in 1894 by the noted theatre architects Ernest Runtz and C.J. Phipps. Inside the auditorium were terracotta figures of ‘Comedy’ and ‘Tragedy’, the work of sculpture W.J. Neatby. By 1907, it was operating as a Jewish playhouse.

In 1910, it was equipped to screen films and its use as a cinema continued for many years, together with use as a Yiddish drama theatre. The Pavilion Theatre was closed in November 1934 (possibly a victim of the Depression).

The building remained unused for many years, and it was severely blast damaged by German bombs in October 1940. The ruins of the Pavilion Theatre were finally demolished in August 1961.

In 2010, the site near the northwest corner of Whitechapel Road and Vallance Road, and Whitechapel Tube Station is still vacant land.