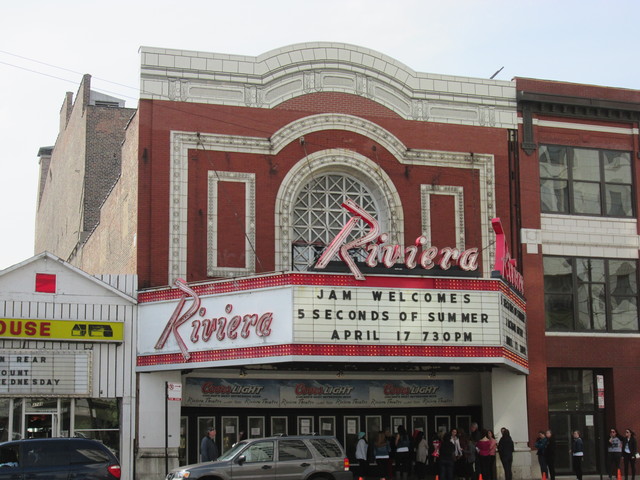 The Riviera Theatre was the largest and most ornate of the movie theatres of the Uptown neighborhood until the opening of the Uptown Theatre almost a decade later. Opened October 2, 1918 with Lina Cavalieri in “A Woman of Impulse”. Built at a cost of well over half a million dollars (delayed by almost two years due to World War I), this Rapp & Rapp-designed house located on N. Racine Avenue between Broadway and W. Lawrence Avenue, originally seated 2,600 and its building also featured eight storefronts and over 30 apartments.

Initially the Riviera Theatre was to have been operated by the Jones, Linick & Schaefer chain, which operated several Loop movie houses in the 1910’s and 1920’s such as the Orpheum Theatre, the Rialto Theatre, and the McVickers Theatre. However, the Riviera Theatre ended up becoming the second major theatre of the Balaban & Katz circuit, which at the time also included the Central Park Theatre, now regarded as Chicago’s first true ‘movie palace’.

Featuring movies accompanied by the orchestra of S. Leopold Kohl, the Riviera Theatre also featured “high class” musical acts on stage. It was initially equipped with a Barton theatre organ which was later replaced by a Wurlitzer organ. The theatre mainly catered to the upper-middle class residents of the Uptown area, especially women. The Riviera Theatre continued to remain one of the neighborhood’s most popular movie houses for decades, even once the almost 4,500-seat Uptown Theatre opened just down the street.

By 1977 it was in its final days as a full-time movie theatre as occasional live concerts were beginning to be staged. It became first a nightclub in 1986, and a few years later, after the nightclub closed, one of Chicago’s most popular concert venues, as it remains today.

It still has a feel of faded elegance to it, and in 2000 the concert hall was named one of the historically important structures making up the Uptown Square National Historic District.

They have an extensive lineup of concerts for 2018!

The Riviera closed as a movie theatre in 1983.

Jam Productions downloadable coloring book of the Riviera and other theatres.

Fall 1977 Reader ad designed for Jam Productions by and courtesy of long time Chicago graphic artist Shelley Howard added. It confirms that the Riviera was already doing double duty as a concert venue prior to 1983. The Billy Joel date of 11/19/77 is confirmed via the Chicago Tribune as well.

The Riviera was the first mechanically refrigerated (air conditioned) theater in Chicago, with ads for its “freezing plant” first appearing in the Tribune on June 12, 1919. The Central Park, which is often cited as the first air conditioned theater, did not open with a plant in place, but was added at the same time as the Riviera’s, with its advertisement appearing June 21. The Central Park is probably usually cited as first because it opened before the Riviera.

However, the Empire Theater in Montgomery, Alabama had a CO2 refrigeration system in 1917. http://archive.org/details/motionpicturenew162unse/page/2804/mode/2up?view=theater

And a similar system was described in the National Theater in Los Angeles in 1914: http://archive.org/details/motionpicturenew102unse/page/n490/mode/1up?view=theater

PHASE 1: DISCOVERY The front windows at the Riviera Theatre You may have noticed something different about the entrance to the Riviera Theatre. We uncovered the original transom windows that had been covered for at least 60 years. All but one were still intact allowing customers to get a glimpse of the lobby chandelier before even getting in the front doors. See the before and after photos!

The JAM Productions Facebook page has dozens of photos of ongoing renovations in the link below. Today they posted 8 photos of old balcony seats removal and the installation of 820 new seats on that level. Posted in gallery as well. (I recall some of the old seats had Granada stenciled on their backs at past shows.)