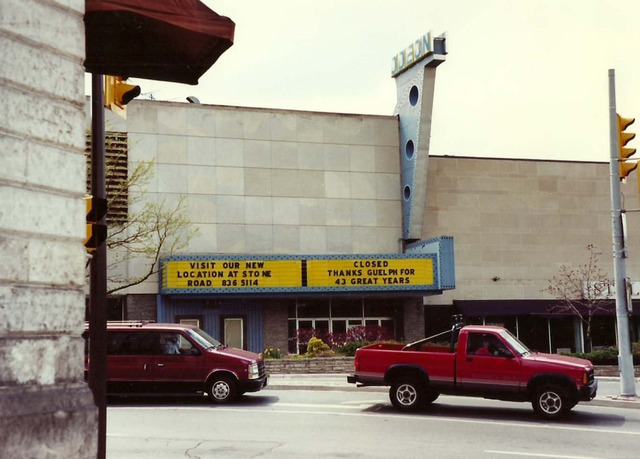 Opened on 31st October 1947 and built on an adjacent site to the Capitol Theatre. This theatre was the landmark theatre in Guelph, Ontario for over 50 years! I watched most of my childhood movies there and it was just before the explosion of the mega movie houses today.

I dont live in Guelph anymore but I have pictures from a few years ago of the exterior and if I can find it, a picture of the theatre in it’s heyday back in the late-1960’s early-1970’s. The Odeon Theatre was closed in 1990 and operated as a nightclub, named Club Denim. By 2014 it had become the Guelph Concert Theatre.

Several years ago, the city of Guelph gave the property landmark status due to it’s original neon sign for which most have disappeared from the city.

The precise address is/was 161 Wyndham. It was a part of the Odeon (Canada) circuit well before the creation of Cineplex Odeon, having opened in 1949 (if the information on the Rivest List is accurate). I would imagine that most locals referred to it simply as the Odeon right up until its closing, which appears to have occurred in the early 1990s.

Yes the proper name for this theatre was the Odeon.

Yes, Odeon, I didnt make the distinction, sorry. I now have the pictures I spoke about. When cinema treasures allows uploads again, I will post them.

I Just wanted to make sure the theater had a place in here. I cant inagine Guelph without the Odeon being mentioned! Thanks for the further info…. Cheers!

An item in Boxoffice of October 19, 1946, about delays in construction on various theater projects in Canada said that the Odeon at Guelph was an exception, and that it was expected to be completed soon. They should have knocked on wood. The house was not opened for another year.

Boxoffice of November 8, 1947, said that the Odeon Theatre at Guelph had opened on October 31. The item also said that architect Leslie Kemp had been “interested in the design” of the theater. Kemp was an English theater architect who had come to Canada to oversee the completion of the various Odeon theater projects designed by the late Jay English, who had drowned that August.

The long-delayed date of opening indicates that the Guelph house was designed by Jay English, and that Kemp only oversaw the later period of its construction and took care of any minor design changes that might have been made while the project was being completed. Kemp’s arrival in Canada was announced in the October 11, 1947, issue of Boxofffice, though he probably had been in the country for some days before the item appeared.

According to this 2002 online Guelph history, the Odeon was built on the site of Guelph Royal Opera House (later the Capitol Theatre) and became a nightclub called Club Denim (which appears to be still in operation): View link
However, as noted above, the Odeon opened in 1947, and the Opera House had an even-numbered address which would have placed it on the other side of the street.

Awsome research! Yes club denim has been there for some time now. Although I no longer reside in Guelph I beleive it is still operational.

The outside of the building has to be preserved due to a Guelph bylaw which gives some hope that maybe someday, someone will come along and restore the theater, but it’s a long shot I’m sure.

By the way, thanks again for all the research and additions to this post, you guys are great! It was far to long that this theater didnt have a place on here, hats off to you guys…..

There were only two screens at the Odeon (it was twinned in 1978), not three as listed above.