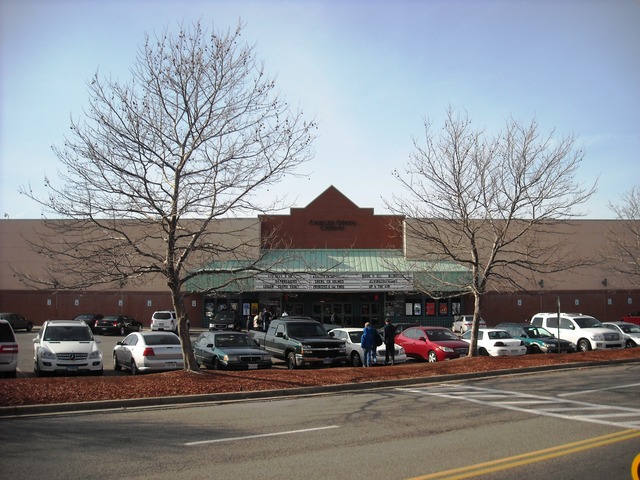 The Saint Charles Town Center 9 opened in the early-1990’s under the Cineplex Odeon banner. Although the complex was considered state of the art during its initial years of operation it lost this distinction a few years later when the next generation of cinema showplaces appeared featuring stadium style seating. It is still a good venue for first run fare.

Most uncomfortable seats in the history of movie theatres. I saw “Step Brothers” here.

This was originally a Cineplex Odeon location that was part of the merger with Loews, then became AMC when AMC acquired Loews in 2006. This theatre was scheduled for a renovation to stadium seating and an expansion of three screens prior to the AMC acquisition but Loews never followed through with it. The design is pretty much a nightmare in terms of operating it. There are two concession stands across from each other in the lobby, and the entrance at the front is too small. The largest auditoriums are at the front of the building and there isn’t anywhere for people to wait to go into the next show without blocking the concession stands. Also the theatre is designed with the nine auditoriums around the perimeter of the building. This theatre does a solid business but because of it’s age many in the area choose to travel to other places outside of Waldorf to see movies.

AMC recently announced a $4.5 million renovation to include upgraded reclining seats (like the AMC Lakewood 12 or AMC Vestal 9), along with upgrades to the bathrooms, concession area, lobby, and box office areas.

Renovations here are complete and quite impressive. It may stall plans for a Bow Tie Cinemas megaplex in Brandywine.

Someone deleted my comment once again from this theater!! I saw Star Wars: The Phantom Menace here back in ‘99 in the theater that had DTS, which was probably the larger of the ones since I am sure Lucasfilm demanded the best for its first run release. It didn’t have the then updated Dolby EX system. Nothing memorable here. The presentation at the Senator, in Dolby EX, and the Uptown, DTS and its huge screen were better experiences.

As far as Bow Tie opening a theater, I believe they have cancelled plans. Their website no longer has the Brandywine Crossing location as a future theater. I had spoken with a CR rep, back in February, about my frequent moviegoer point error and asked about the opening. She said they are no longer interested in the once Kerasotes (now bought by AMC) site.

Renovations are complete and this is now the best AMC I have ever visited. Every seat is a full recliner similar to (if not better than) my large leather recliner at home. All projection and sound has been upgraded to fully digital as is now being mandated by the industry. They have also gone to 100% reserved seating that may be purchased online. No more having to get to the theatre early just to insure you get a decent seat. My only complaint is they could have done a little better job of sound proofing between auditoriums. Who wants to hear a shoot out coming from the next auditorium during a particularly quiet or poignant scene in your movie? This is not an issue at this theatre only though. Congratulations AMC — nice job!