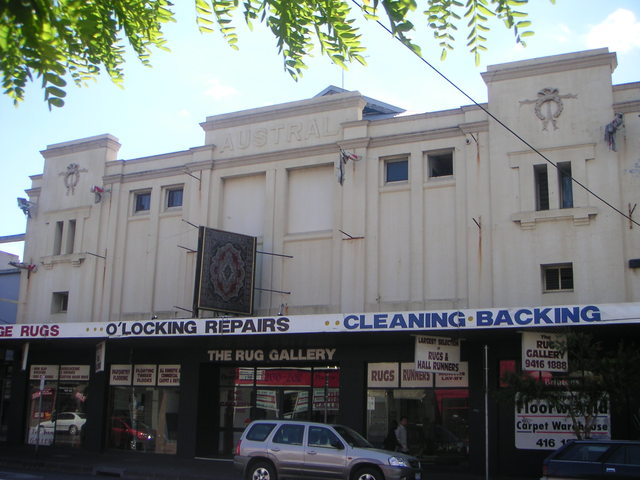 Located in the Colingwood district of Melbourne. The Austral Theatre was opened in 1922. From the street it is clear that large parts of this theatre are still intact. The facade displays several stripped back classical elements combined with sparring use of ornate decorative motifs, typical of the 1920’s and 1930’s in Melbourne. "Austral Theatre" is still visible on the parapet of the building.

The entrance foyer and ground level shop fronts are very much intact. The original plaster chandelier above the entrance and decorated ceiling (in a Neo-Baroque highly ornate style) are visible as you enter the building.

The original women’s and men’s toilets are still intact with urinals and sinks boarded up and out of harms way.

The original circle is also intact minus the seating. The outer face of the balcony there is highly ornate and is covered in plaster swirles and fern-like decorations.

The proscenium is not visible as an apartment has been built over it, however I was told that large parts of it are intact. The only part that was visible was the large panels which flank the stage, they are decorated with reclining classical Greek figures and are flanked by columns and topped with decorative friezes.

The Austral Theatre closed as a cinema in 1964. It became an inporters storage building, before becoming its current use as a Floorworld carpet store.

This theatre is remarkably intact and is a wonderful example of the type of theatre that was once so common in Melbourne.