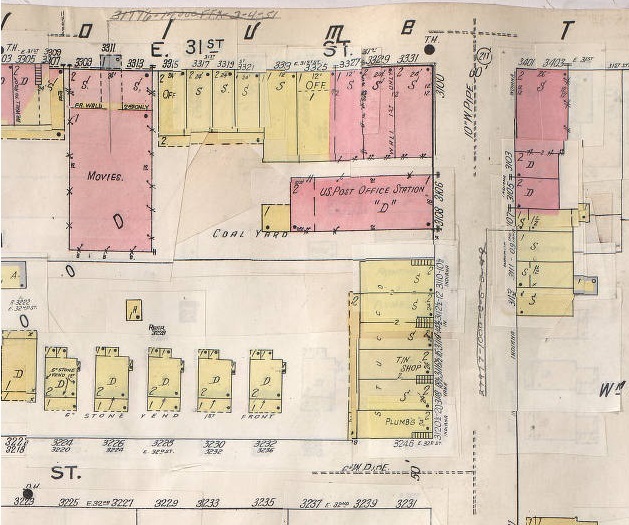 The New Central Theatre opened in April 1925 with seating listed at 748. It was located just a few blocks from the smaller Baltis Theatre.

The Central Theatre closed in the early-1950’s and has since been demolished.

The April 11, 1925, issue of The Reel Journal noted the progress of construction on the New Central Theatre in Kansas City:

“The New Central Theatre, which is under construction at Thirty-first street and Indiana avenue, Kansas City, rapidly is nearing completion and is expected to open on Easter. The theatre, a suburban house which, represents an investment of $70,000, is being erected by T. H. Brougham and will be managed by Jack Tiller, formerly of McCook Nebr. The theatre will seat 900 persons.”The May 2nd issue said that the New Central had opened that week. Then the May 23rd issue ran this item:

“Hardly had the new Central Theatre, a suburban house of Kansas City, opened its doors the other day until the sale of the house was announced. The theatre was purchased by Gregg & Crandall from Jack Tiller of McCook, Neb., for $12,000.”

$12,000 for a brand new $70,000 theater would have been quite a bargain, so I suspect that Gregg & Crandall also had to assume a substantial outstanding debt on the house as well.

The address for the Central Theater was 3311 E. 31st Street.

This early silent-era theatre was boarded up when it went out of business in 1913. Charles A. Smith of Kansas City was the architect who updated the theatre for its reopening in 1925 as the New Central. In 1950, it became the Eastown Theatre. It transformed to the Eastown Ballroom by decade’s end before being damaged in a fire on January 28, 1959.