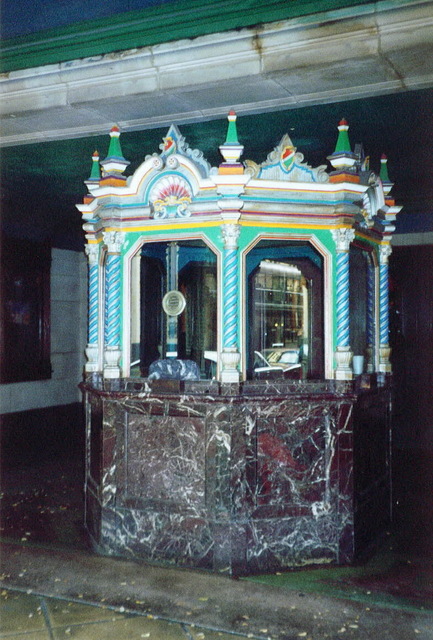 The Majestic Theatre was opened June 14th, 1929 by the Interstate Theatre Corporation, designed by Chicago architect John Eberson. It is regarded as among the best examples of Eberson’s Atmospheric style theatres in the country.

When it opened, the Majestic Theatre had a seating capacity of 3,703, the largest movie house of the South at that time, and among the many movie houses of San Antonio, including the nearby Empire Theatre, the Texas Theatre and the Aztec Theatre. The Majestic was probably the city’s most popular-an entertainment mecca unlike anything the city had ever seen, hosting vaudeville, stage shows and motion pictures.

While the exterior was fairly straightforward (except for the marquee and multi-story vertical sign), looking like simply an office tower that could have been in any US city of the day, the inside was awe-inspiring. From its spacious lobby, complete with statuary and ornate plasterwork, as well as an aquarium filled with tropical fish, to its lounges and various other public areas, patrons must have immediately felt like they were in a fantasy land, but it wasn’t until they entered the auditorium itself that they were truly transported.

The auditorium, with its tiered balconies, and sea of plush seats, was cavernous. Its ceiling, painted deep blue, was dotted with “stars”, with artificial clouds slowly rolling by. Eberson insisted on being as authentic as possible, and consulted the National Geographic Society to make sure the constellations were accurate. The side walls were built to resemble a Spanish village, complete with ivy-covered turrets and spires, windows and archways, Roman statuary and stuffed birds half hidden in the greenery.

Three sets of boxes on either side of the balcony, stretching along the side walls, blend smoothly into the ornate plaster facades. Above the soaring proscenium, itself covered in plasterwork, is a statue of the goddess Venus, looking across the auditorium.

After decades delighting audiences, both with its onscreen offerings, as well as the breath taking surroundings, the Majestic Theatre, like so many of its neighbors, drew less and less patrons once television became more and more prevalent, and finally closed in 1974.

Seven years later, after a superficial remodeling (which unfortunately removed a great deal of the original décor, which had been mostly intact until then), the Majestic reopened as a venue for touring Broadway shows, until it was closed again in 1988, for a complete renovation and restoration project, which would return the theatre to close to its original splendour. Las Casas, the Foundation for Cultural Arts in San Antonio, spent close to $5 million on bringing the palace back to life.

When it reopened amidst great fanfare in 1989, it was now the home of the San Antonio Symphony Orchestra, which celebrated its half century by moving into its magnificent new venue.

In addition to classical concerts, the Symphony also offers a “Pops” series, as well as children’s concerts. The Majestic continues to also host Broadway shows, including “Miss Saigon”, “Rent”, and “Beauty and the Beast”.

The Majestic Theatre is listed on both the State and National Register of Historic Places.

This theater seems to be fantastic. Unfortunately, nothing was playing while I was in San Antonio. Of all the San Antonio theaters that were ever built I am most happy that this one in particular has been saved. Their Broadway schedule for the 2011/2012 season includes La Cage Aux Folles next Spring so I will try to come back then to actually see a production inside this Eberson masterpiece.

I too love the Majestic, but it is tied in my affections with the equally incredible Aztec; I worry even more about the Aztec’s long term prospects because all they have come up with since its restoration in terms of programming has been crappy touristy-oriented stuff.

Just learned of this theatre through a neighbor whose mother lives in San Antonio Texas!

The Majestic, one of the truly grand theaters! I was fortunate to go to this treasure in 1963 while in the Air Force at Lackland. I had never seen such a theater, stars and clouds, what a interior, I don' t remember what was playing, I was in such awe of this magnificent theater. San Antonio has saved one of the great theaters to be enjoyed for years to come.

I was at Lackland around 1966 and saw Cinerama’s How The West Was Won" but I can’t remember the name of the theatre.

I was back visiting this year and wondered if that theatre was still there.

My dad was stationed at Lackland from ‘66-'69 and I always thought it was a treat to go to a movie at the Majestic. I remember watching the Beatles’ Yellow Submarine there and walking down the aisle during the show seeing kids huffing glue. My first introduction to drugs…at the Majestic!

Numerous views of John Eberson’s atmospheric auditorium can be seen during a KD Lang concert currently airing on many PBS stations across the USA. Link here

1955 photo added. Audie Murphy rides in front of the Majestic Theatre at the world premiere of “To Hell and Back” based on his life story.

If you’re a fan of the Majestic and haven’t seen the color photos at the link below, they are worth checking out. Make sure to scroll down as there are photos at the bottom of the page as well.