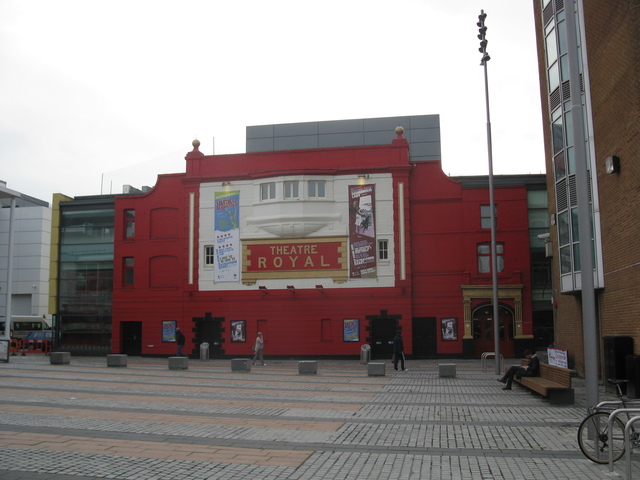 The Theatre Royal was built for Charles Dillon and opened on 17th December 1884 with a production of “Richelieu - The Conspiracy”, starring Charles Dillon. It was designed by architect James George Buckle, and seating was provided for 1,000 in stalls, dress circle and balcony levels. There are a pair of boxes on each side of the proscenium. The foyer is actually a passageway, which runs the length of the auditorium on the right hand side. At the end of the foyer is the large theatre bar.

The Theatre Royal was sold to Albert O'Leary Fredericks in 1886, and it remained in the Fredericks family until 1932. It was modified and enlarged in 1888 and in 1891.

In 1897, it presented Poole’s Diorama, a precurser to the Cinematograph. The name of the theatre was changed to Palace of Varieties and in 1902, noted theatre architect Frank Matcham re-designed the interior. Seating was now provided for 248 in the orchestra stalls, 130 in the dress circle and 121 in the upper circle. The proscenium is 23 feet wide, the stage 32 feet deep and there are twelve dressing rooms. Films were shown in 1907 to 1909, but were not the main part of the programme.

It reverted back to the Theatre Royal name by 1914. A fire on the stage on August Bank Holiday Monday of 1921, did considerable damage to the rear of the theatre. Thankfully the fire happened at midnight, and the safety curtain was in the lowered position, saving the auditorium from damage. The Theatre Royal was closed until January 1922.

After re-opening, it became a theatre famous for presenting melodrama’s, such as "Maria Marten and the Red Barn" and Tod Slaughter in "The Demon Barber of Fleet Street". After 1932, under new management, it became a variety theatre again, but was very much a third rate theatre. It was closed after five weeks, and remained closed until 1935. Re-opening under new management, it had a few hit shows, then closed in December 1938, and remained closed until 1943. Revues were tried, but failed and again the theatre was closed until October 1946.

Taken over by David Horne, it eventually became a successful playhouse, with Sybil Thorndike & Derek Bond in "Gaslight". Closed again in December 1949, it was taken over by Joan Littlewood’s Theatre Workshop presenting "Alice In Wonderland" for one week, before several years followed with presentations of nude shows such as "Strip, Strip, Hooray" and "All Off Tonight". This era ended in January 1953.

Joan Littlewood’s Theatre Workshop then took over the Theatre Royal, and it soon became ‘the’ place to see experimental theatre. Notable productions include premier presentations of Brendan Behan’s "The Quare Fellow", "A Taste of Honey", Lionel Bart’s "‘Fings Ain’t Wot They Used t'be", Wolf Mankowitz’s "Make Me An Offer", "Ned Kelly", "Sparrers Can’t Sing" and Oh! What A Lovely War". Many of these productions transferred to London’s West End, and even to New York’s Broadway, and some were made into successful films.

The Theatre Royal is a Grade II* Listed building.

The Comedy Theatre in Panton Street in London’s West End has a pre-cantelevered auditorium that provides some of the worst sightlines from some seats you could ever imagine in a modern theatre.