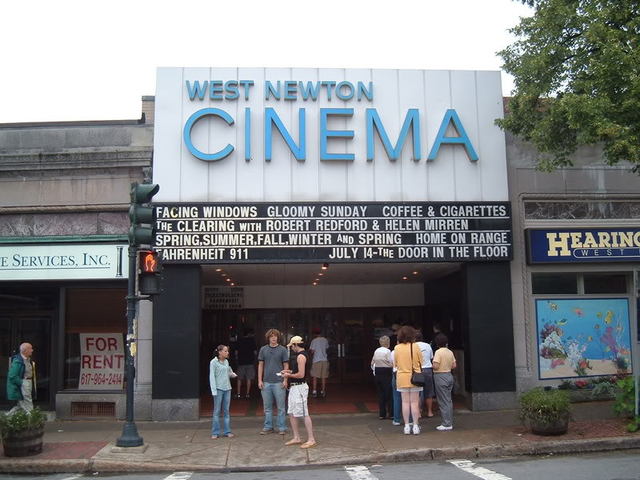 The Newton Theatre was designed in 1937 by architects Krokyn & Browne of the Boston based architectural firm Krokyn, Browne & Rosenstein. This theatre combined elements of Art Deco and Art Moderne styles. The West Newton was part of the M & P Theatres circuit, which also owned the Metropolitan (Wang Center) in Boston.

The theatre was the area’s entertainment hub for thirty years, but, by 1967, had begun to deteriorate. As the crowds dwindled, the beautiful cut-stone facade and marquee were removed, and theater was converted into a triplex.

The triplexing saved the theater from demolition by increasing the flow of cash, but by 1977, the theater was again in desperate trouble. Rain flooded into the upstairs theater and the rest of the facade and new marquee were removed. It was sold in 1978 and expanded to six screens in 1990. The new auditoriums were carved from unused space and brought back some of the theater’s original Art Deco style flavor.

Today, the theater specializes in an inventive mix of art house, family, and independent films. Tastefully restored and renovated, the theater’s lobby gives notice that the West Newton was once a grand palace.

I looked through some Boston Globe microfilm from the early 1960s, and saw this theatre listed in the directory as just the “Newton”, not “West Newton”. The early photos shown here have just “Newton” on the marquee.

From the current edition of the West Newton Cinema weekly newsletter:

And in case you haven’t heard, we now own and operate the only movie theatre in Belmont.Â  It is a 425 seat, single screen gem called the Belmont Studio Cinema.Â  Located at 376 Trapelo Road in Belmont, MA.Â  The Studio plays a lot of the same films as West Newton but also shows some of the better commercial films as well.

Tonight, the German-Hungarian film Gloomy Sunday closes at the West Newton, 70 weeks after it opened there.

The film’s longevity brings to mind other famous local long runs, such as King of Hearts at the Central Square, Harold and Maude at the Allston Cinema, and Cinema Paradiso which ran for 68 weeks at the West Newton.

Hello, I was just surfing the web and came across this website. It’s great, considering my great grandfather is Martin J. Mullin! It’s interesting to look at, but unfortunatly I never go to meet him but his son, (my grandfather) Martin J. Mullin. Well just wanted to post a comment.
Tara Mullin

The MGM Theatre Photograph and Report form for the Newton Theatre has a facade photo taken in April 1941. The name on the marquee is just plain “Newton”. The address is listed as 1300 Washington St. The Report states that the Newton has been a MGM customer for less than 5 years; that it was built in 1935; that it’s in Excellent condition; and has 822 seats on the main floor and 340 in the balcony, total: 1162 seats. Competing theatres are located in Natick and Wellesley Hills. The 1940 population of Newton was 69800. If the theatre was actually built in 1937 instead of 1935 then that would conform to the fact that the house had been showing MGM films for “less than 5 years” in 1941.

Does anyone know exactly when the theatre was renamed from ‘Newton’ to ‘West Newton’ ?

Visiting the West Newton in the triplex days was a unique experience. The auditorium downstairs was c classic butcher job in which a wall was created the length of the theatre.

Upstairs the balcony provided the seating and a tufted fabric surface covered the area between the balcomy railing and the screen.

While visiting relatives with my family in 1950, I remember walking yp Cherry St. To the then Newton theatre(1 screen) to go to a movie. I didn.t care what was playing because I was bored at my aunts house. Well the movie that was playing was an acclaimed Docu. called Kon Tiki. Even at 10 yrs old I enjoyed it. I now own the DVD. The Newton was a beautiful theatre.