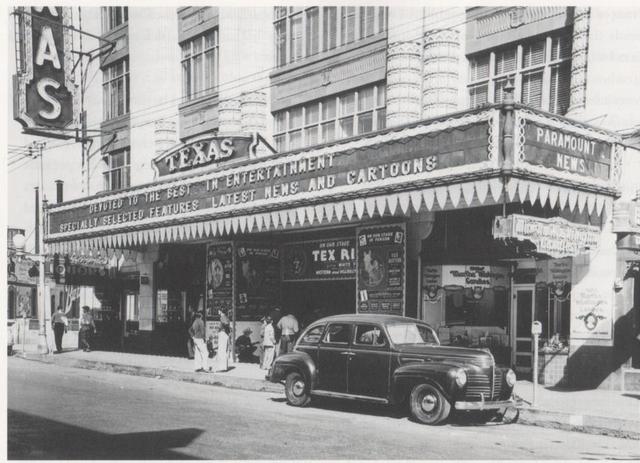 Opened on December 17, 1926 for the Publix-Paramount chain, this large downtown theatre was designed by the Boller Brothers firm, and was done in Spanish Colonial and Rococco style. Its fantastic terra-cotta facade, complete with columns and multicolored arches decorated with gilded medallions, in addition to its huge vertical marquee, were as spectacular as the interior, which was one of the city’s finest movie houses of the 1920’s, along with the Empire Theatre, Aztec Theatre and, later, Majestic Theatre.

Hailed by Publix as ‘San Antonio’s Two-Million Dollar Showplace’ when it opened, it was the site of the premiere of Paramount’s “Wings” less than a year later, which was filmed near San Antonio. Stars Buddy Rogers and Clara Bow were both in attendance.

However, after many years as a successful first-run house, even thriving during the Depression era, the Texas Theatre began to decline, and closed in the 1970’s. Unfortunately, just as interest in saving many of the area’s historic buildings was starting to pick up, the Texas Theatre was razed in 1983, but its facade was salvaged, and incorpated into the modern office building built on the site. When Southwestern Bell took over the building, it meticulously restored the Texas' terra-cotta facade to its 1920’s appearance.

The facade looks pretty haphazard tacked onto the new office tower, at least from the photos I have seen.

From the late 1930s a postcard view of the Texas Theatre in San Antonio.

Just saw this spectacular facade in downtown San Antonio. What an incredible travesty that the rest of this theater was demolished for such an ugly office building which could just as easily have been built on any of the vacant lots in the surrounding area. I’m sure the interior was amazing. I am, however, still grateful that the facade and box office are still with us but it leaves me wanting more. I wish they had made the decision to keep the lights as well. Alas…..

I was an usher at the Texas around 1960. Later I worked down the street at the Majestic. Lots of memories.

Of historic significance, the Texas Theater was the site for the premiere of the first Academy Award for Best Picture recipient, “Wings.” The film was shot in and around San Antonio, primarily at Kelly Field AFB.

I know full well you can’t save every old theater. But this was such a nice room that it’s a shame they couldn’t have done better. I suppose if it had to be this or the Majestic they probably picked the better of the two. But I wish they had finished the job. They should have either torn the facade down or disassembled it and put it back up where it didn’t look like a stuffed deer head on someone’s trophy wall.

I hear you Life’s Too Short. I am happy that the facade was saved. It’s beautiful. But it actually makes it difficult to look at as you can’t help but feel awful that at truly beautiful theater was demolished for a run of the mill office tower. Yes, I prefer the facade over complete demolition, but it still hurts.