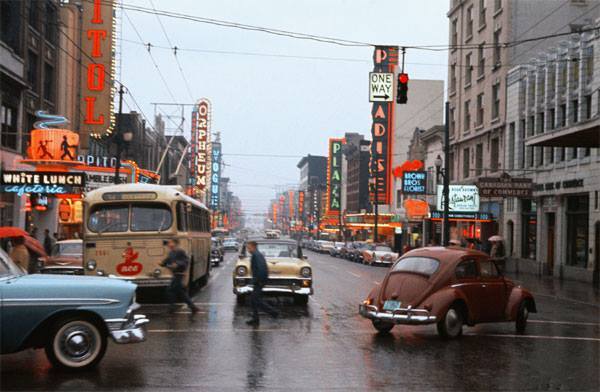 Opened on April 13, 1941 with George Formby in “I See Ice”. This first-run movie house had 1,347-seats and was designed in an Art Moderne style. The Vogue Theatre was taken over by Odeon Theatres during construction. Seating was provided in orchestra and balcony levels. On the splay-walls beside the proscenium were large painted murals. Troughs across the ceiling provided concealed lighting for the auditorium.

It now serves as a popular venue for performing arts, including concerts and Broadway shows, and is known for its superb acoustics and intimate atmosphere.

A 1998 restoration project has brought back the Vogue Theatre’s original appearance, as well as state-of-the-art light and sound systems being installed.

The theatre is a Heritage Building of the City of Vancouver.

It did how ever come back re-releases and a charity screening of all three of them in 70MM. The details of the later I’m not too sure of but it could have been at the Stanley in 1985.

Jedi opened in 70MM at the Vogue.

Here is a postcard circa 1940s:
http://tinyurl.com/dlrhtr

Here is a night shot:
http://tinyurl.com/m5zc9d

The Vogue was back running film again at VIFF 2011. I’m told they now have Dolby Digital. Still the same Victoria 10 projectors from way back when, running 6000 reels.

Summer of ‘77, time to dress warmly and see if this “Star Wars” is really “The Year’s Best Movie”…

Film Projectors and associated equipment apparently have removed from what was known as the booth. The projection booth has now become an office.

Link with a high resolution version of the April 1975 photo of the Orpheum & Vogue.

Grand opening ad from the 12th: