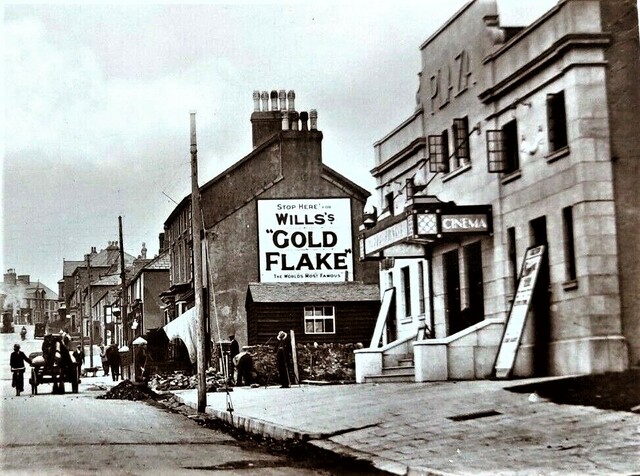 Located in Pen-y-Groes, Caernarvonshire. In 1933, Captain W.E. Pritchard opened the Plaza Cinema on land he had acquired in Water Street. Holding 600 seats in "Modern comfort", it held one show per night with sound provided by a Western Electric(WE) system.

Also in 1933 the venue showed what was probably the first sound drama made and set wholly in Wales, "Men against Death". Directed by C.H. Dand, better known as a publicist and scenario writer in the (now defunct) Wembley Studios in London, the film showed slate quarrymen facing daily perils in the Dorothea Quarry, near Talysarn, in the 19th century. This film proved extremely popular at the venue as it featured quarrymen actually employed at the quarry at that time. The film however was handicapped by its ‘E’ rating (which meant that it was classified as a foreign film) and it did not gain a wide showing as it was ineligible for the British quota. Only six minutes of the film survive of this two reel film in the British Film Institute.

The Plaza Cinema was popular in the 1930’s, but in 1945, following the death of Captain Pritchard it was sold by his family to Guy Baker’s Paramount Picture Theatres Ltd. group. The cinema continued along unspectacularly with CinemaScope being installed in 1956 when seating capacity fell to 550 patrons to cope with the new lines of sight.

Falling audiences led to its closure on the 23rd November 1963 after a last programme of "That Kind of Girl" starring Maggaret Kiel and "Girl in the Sun". Left empty to deteriorate, it was largely destroyed by a fire on the 21st February 1964 which saw two firemen suffer injuries that hospitalised them. The remains were deemed unsafe and were subsequently demolished.

I’ve adjusted the Google Street view to the garage where the Plaza once stood.