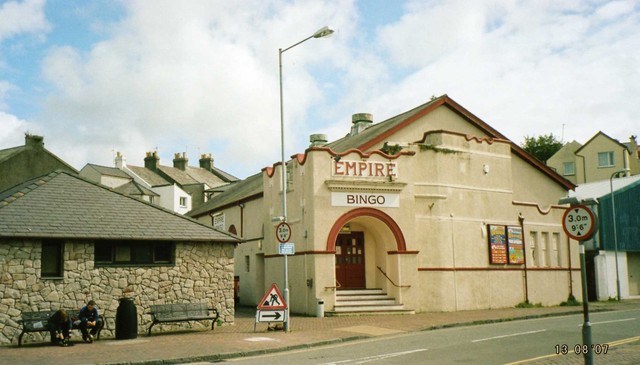 The Empire Cinema was the first purpose built cinema in Carnarfon, opened by Mr. Caradoc Rowlands in 1915. Not a lot is known of Mr. Rowlands but in 1898 he was one of those responsible for putting on a "Living Pictures" show at the Guildhall. This was not a film however but a series of tableau’s where people would pose in the style of a well known painting and then move to bring the picture to life. The cinema held one show nightly with three on Saturdays (Sunday was still a traditional day of rest, so no shows were allowed) at prices ranging from 3d to 1/3d. It made the transition to the sound era in 1930 with a British Acoustic sound system.

In the early-1930’s it changed ownership to Capt. W.E. Pritchard who went on to develop a small chain of cinemas in Pwllheli, Porthmadog, Pen y Groes, Criccieth and Blaenau Festiniog, and his partner in Caernarfon E.H. Jonathan. In 1945, following the death of Capt. Pritchard Guy Baker’s Paramount Picture Theatres purchased the Empire Cinema from the Pritchard family and in 1956 installed CinemaScope when the seating capacity was reduced to 478 to cope with the new lines of sight.

A bingo licence was acquired in the early-1970’s and film shows were reduced to 4 nights per week. Eventually bingo took over completely and in 1986, following the death of Guy Baker, Apollo Leisure took over the hall, refurbished it and today film shows are but a distant memory.

Captain Pritchard was in fact born an ‘Elias’, quite a well known name around the area I live. The story goes that his brother moved to South London and founded a small chain of shops. Because of anti-semitic feeling at the time, although not Jewish, the brother adopted the name Pritchard to prevent any of this feeling affecting his stores. Captain Pritchard ( a Merchant navy title, not an army one) changed his name also, although there no record of anti-semiticism in North Wales. He retired from the sea in 1909 and lived in a house he purchased in Criccieth.