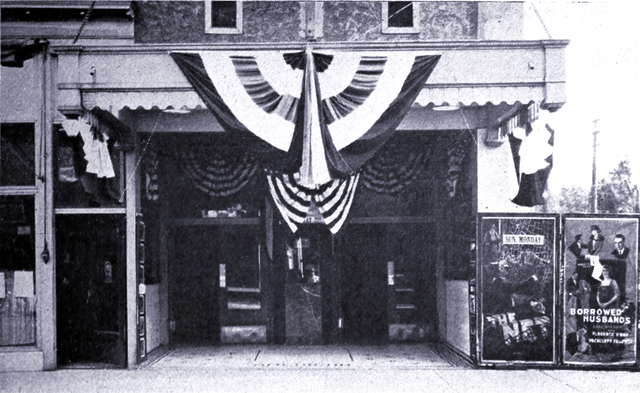 The entire town of American Falls was moved to higher ground in 1925 to create the American Falls Reservoir. According to information from The U.S. Bureau of Reclamation on file at the Idaho State Historical Society, the theatre wasn’t one of the buildings moved so it is assumed the building was built after 1925. It opened as the Iris Theatre on August 12, 1926.

When Melvin Morris later assumed ownership it was a vaudeville house complete with a stage and dressing rooms and continued the stage shows along with the movies.

The Iris Theatre can be traced back as far as 1928 in the Film Daily Yearbook, and the Yearbook’s 1951 listing gave its seating as 400, but the interview with Richard Morris said it seated between 600-700 on the main floor and in the balcony. Morris said during its heyday they had full houses almost every night. It was at the Iris Theatre where the younger Morris learned the theatre business.

The following copy appeared in a display ad, with a photograph, found in the Pocatello Idaho State Journal on August 8, 1975: ‘Americana Theatre. This choice historical property has recently been renovated, redecorated, painted throughout, new carpeting, seats reconditioned and recovered, projectors reconditioned. New lobby and exterior. Ready for reopening.’ It is not known if the theatre was sold but it had its grand re-opening on November 19, 1975. It appears that by 1977 the theatre was on the market again as beginning May 13, a business opportunities ad appeared in the Journal, which said: Americana Theatre. $15,000 down, owner will carry balance of $60,000 price.