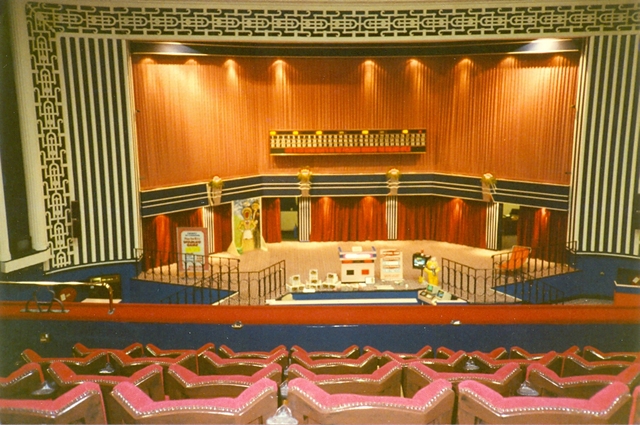 The Ritz Cinema was built for the Union Cinemas chain and opened on 22nd March 1937 with William Powell in "My Man Godfrey". Film & stage star Jack Buchanan attended the opening and Billy Cotton & his Band performed on stage. The Wurlitzer 3Manual/8Ranks organ was opened by Harold Ramsey, the illuminated surround of the console was designed by cinema architect Leslie H. Kemp, who was also assistant to architect Robert Cromie.

The Ritz Cinema was the largest cinema built in the county of Kent. It had lavish Art Deco style decorations and there was a large ‘sky-sign’ on top of the building (later removed in the 1980’s). The cinema also boasted a café/restaurant for the convenience of its patrons.

The Union Cinemas chain were taken over by Associated British Cinemas(ABC) in October 1937, and they operated the cinema for the remainder of its cinematic life. It was equipped to screen 70mm films. The Wurlitzer organ was removed from the building in 1972, and was installed in the Buttermarket in Shrewsbury.

The Ritz Cinema was closed on 20th May 1972 with a double bill of sexploitation films: Wolfgang Lukschy in "The Naked Countess" and Anna Kristina in "I Do It My Way". It was converted into a bingo club, first operated by Star, then EMI and Coral, before Gala Bingo Club’s took over.

The building was always well maintained and was successful as a bingo club. It was being considered for Listed building status in the Summer of 1968. Disaster struck in the early hours of the morning of 30th September 1998, when the building was destroyed by a massive fire. Only the front section was spared, and this was later demolished. The final indignity was during demolition, when only the front section and façade remained, the scaffold supporting the façade buckled and it collapsed into the street, blocking the road with twisted scaffold and bricks. Luckily, there were no casualties.

A new purpose built Gala Bingo Club was built on the site.

A vintage 1962 photograph of the Ritz Cinema:
View link

The future of the (long removed) Wurlitzer is now in some doubt. The Buttermarket in Shewsbury last converted into a nightclub (with organ still in situ) but the nightclub has now closed with heavy debt.

Architect Leslie Kemp was Supervising Architect on behalf of Robert Cromie. It was Kemp that designed the Wurlitzer Console. The whole of the interior was designed and supplied by the Walturdaw Cinema Supplies