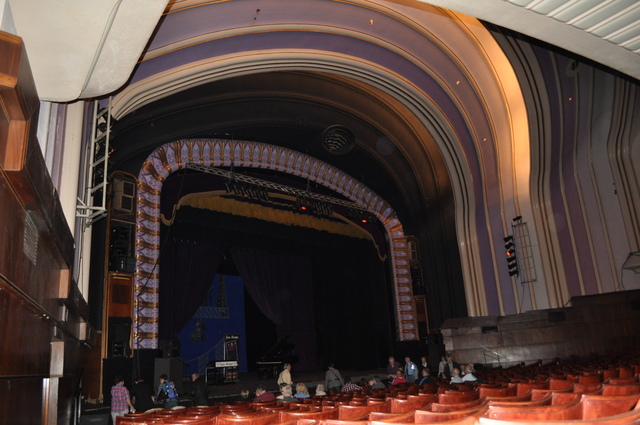 The original Her Majesty’s Opera House on this site was opened on Whit-Monday June 10th 1889 with Gilbert & Sullivan’s opera “The Yeomen of the Guard” performed by the D'Oyly Carte Company. The theatre was designed by noted theatre architect Frank Matcham. It was a drama/musical theatre, and had seating for 2,500. Designed in a French Renaissance style. The proscenium was 28ft wide and the stage 40ft deep. It was built for William Holland and the Winter Gardens Company and was part of the Winter Gardens complex, which also contained the 1,700-seat Winter Gardens Theatre(later Pavilion Theatre), the huge Empress Ballroom and a large cafe, a Spanish Hall plus bars and many other indoor entertainment rooms. It was reconstructed in 1911 to the plans of architectural firm Mangnall & Littlewood, and films were screened. In 1929, it went over to big stage productions after the adjacent Pavilion Theatre in the Winter Gardens complex went over to screening sound films. Her Majesty’s Opera House was closed at the end of the 1938 season on 16th October 1938 with a revue named “All the Best”. It was demolished apart from its facade and part of the side-walls.

The New Opera House was built on the site, still remaining part of the Winter Gardens complex and was officially opened on 13th July 1939 by stage and film star Jessie Mathews appearing ‘in person’ as she was appearing at the nearby Grand Theatre. The opening stage production was a spectacular revue which included a train wrek featuring a full-sized replica of the Royal Scot locomotive, ‘human’ porcelain figures in “A Wedding in Porcalain” and another scene featured “A Naval Battle in the Nelson Period”. The following night on 14th July 1939 the revue “Turned Out Nice Again” starring George Formby began its Summer season run. The New Opera House was designed by architect Charles H. McKeith of architectural firm Derham, McKeith & Partners assisted by architect Budge Reid. The auditorium is in a stunning Art Deco style, similar to cinemas being built at that time. There are a series of troughs across the ceiling and down the side-walls which contain concealed lighting. Seating is provided in orchestra stalls, dress circle and balcony levels. The proscenium is 45 feet wide and the fully equipped 60 feet deep stage can be used for full scale major productions. There are sixteen dressing rooms on five levels.

The Opera House is equipped with a Wurlitzer 3Manual/13Ranks theatre organ (the last Wurlitzer to be installed in the UK) which was opened by Reginald Dixon and Horace Finch. The console is located on the left of the orchestra pit on a lift and the organ chamber is located beneath the stage.

The Opera House presented spectacular Summer shows for the holidaymakers, and films were screened on Sundays, a day when live performances were forbidden. In the Winter and early-Spring months of 1939/1940 began 17 weeks of screening films, and films were the main feature of programming at this time of year for many years. On 13th April 1955, the Opera House became the first theatre ouside London to host the Royal Variety Performance, and a special Royal Box with a canopy above, was constructed on the right had side wall of the auditorium. Also in 1955, the theatre was equipped to screen CinemaScope films and the projection box was fitted with BTH Supa projectors.

Into the late-1950’s and through to today, the Opera House has been in use as a live theatre (although the projection equipement is still in situ). The theatre was restored in 1987, and in January-March 2008, the Wurlitzer organ was fully restored and regular organ concerts were begun in February 2010. Her Majesty Queen Elizabeth returned to the Opera House on 7th December 2009, when the theatre hosted its second Royal Variety Performance (the 81st in the long history of the event), when artistes entertaining the Queen included Bette Midler, Lady Gaga, Michael Bubel, Alexandra Burke and street-dance sensation winners of ‘Britain’s Got Talent’ Diversity.

In August 2013, it was announced that the Winter Gardens Opera House would be equipped with 4K digital projectors with 3D capabilities and a new screen and sound system. Although it will remain a live theatre, films will again be screened when it is not in use as a live theatre. Also planned is to use the building for film premieres, and live broadcasts of opera, ballet, sporting events on the big screen. In January 2016 the Winter Gardens Film Festival was held, screening vintage and modern film classics.

The Opera House (and the entire Winter Gardens complex) is designated a Grade II* Listed building by English Heritage.

and one of the deco foyers serving the upper balcony:–

My Son Keith works at the Blackpool Opera house back stage he has done for 18years. hard graft and a well loved place. my fave show was Summer Holliday Darren Day.

The organ concerts have actually been in full swing since 2008 and are still in full swing now. There is also a new organ being installed in the Empress Ballroom, which was originally home to a Wurlitzer up till the late 60s.

The 2020 Royal Variety Performance will performed here on 8th december.