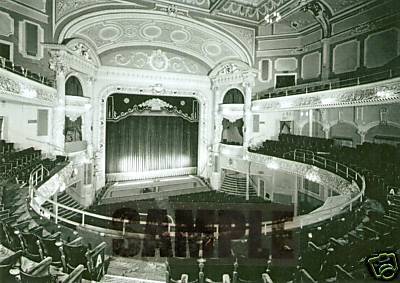 The Winter Gardens Theatre was built as part of the Winter Gardens complex in 1878. Originally, this was a glass roofed Grand Pavilion winter garden, but in 1889, it was converted into a theatre by Oldham based architect Thomas Mitchell. The auditorium was reconstructed by the noted theatre architectural firm Wylson & Long in 1897.

Seating was provided in orchestra stalls and a first balcony, which had slips containing seating, that ran along the side walls to the stage boxes beside proscenium. There is also a second balcony set back above the first balcony, which again has seating in side slips. Both balconies are supported by iron columns. The auditorium has a splendidly opulent Beaux-Arts style. The proscenium is 31 feet wide and the stage was 39 feet deep.

Used mainly as a playhouse, while the other theatre within the Winter Gardens complex, the 2,500-seat Opera House, was used for musicals and variety performances. Dame Nellie Melba appeared in concert at the Winter Gardens Theatre on 31st July 1910.

By 1913, it had been equipped to screen films, and these were screened in the evenings, with live performances being staged in the afternoons. This programming continued into the 1920’s.

Re-named Pavilion Theatre, it was equipped with ‘talkies’ when a Western Electric(WE) sound system was installed and the first to be screened was Laura la Plante in "Showboat" on 24th July 1929, screening in mornings and afternoons. Live shows then transferred to evening performances for a while, and were soon transferred to the Opera House as the only ‘live’ theatre in the complex. The Pavilion Theatre then became a full time cinema, with a seating capacity listed as 2,443-seats.

A Hammond electronic organ was installed in 1952, which was played at intermissions by Ernest Broadbent. By 1960, the Pavilion Theatre was little used, and it became one of the lesser attractions at the Winter Gardens complex. In the 1980’s it was converted into the Pavilion Pizza and Horseshoe bar. The proscenium was bricked in and the stage became a small restaurant. A forestage was added in front of the proscenium, and the orchestra floor was levelled.

It is designated with the entire Winter Gardens complex as a Grade II* Listed building.

The second entrance to the Winter Gardens complex on Coronation Street:
View link

An interior shot of the stage and pros arch of the Pavilion here:–