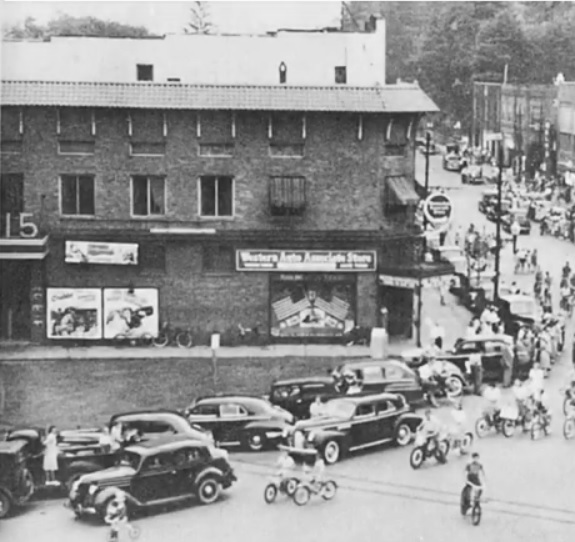 Built in 1892, the building had several retail uses before it became the Universal Theatre, opening on May 9, 1922. Initially it hosted vaudeville & movies. It was equipped with a Wurlitzer of in 1926. On December 11, 1932 it was taken over by Paramount Pictures Inc. operated by their subsidiary North Carolina Theatres. It was renamed State Theatre in 1933. Listed with 400 seats. In the early-1940’s it was operated by Paramount Pictures Inc. through their subsidiary H.F. Kincey. Listed with 438 seats in 1950. It was closed on September 27, 1960. In early-1963 the lobby was in use as a hairdressers. The auditorium has remained vacant for several decades.

The building is on the National Register of Historic Places, and today in home to the Wine Celler & Bistro.

This link shows a vintage photo of the Wine Cellar and Bistro when it was a Western Auto Associate Hardware and the State nearby.

If it closed in 1955, I wonder if it has set dormant all these years? I’m still waiting on a reply from the current owners of the bistro to see if they or someone else is planning to restore the theatre. If I don’t get an email response this week, I plan to call the bistro.

I recently visited this former theatre. I met the owner of the nearby Wine Cellar and she took me on a tour of what is left of the theatre. Plans to restore the theatre someday were mentioned during my visit.

Appears to be Side Street Pour House and Grill as of May 2019 street view.

A fairly extensive history of the State Theatre can be found on this web page. The house opened in 1922 as the Universal Theatre, which had operated earlier at another location. It became the State Theatre in 1933, and for the next several years competed with the new Avon Theatre (1934) for the position of the town’s leading theater.

The State became an independent operation in 1950 and, with other small town theaters, slipped into a gradual decline. For part of the next decade it was operating only two days a week, and ran a great many exploitation movies, though it still had an occasional live performance, particularly of country music. The last movie advertised in the local paper at the State was shown on September 27, 1960, though the house did sometimes run unadvertised shows, so there might have been some movies shown after that date. What is certain is that the lobby of the theater was converted for use as a hairdressing salon in early 1963, and the auditorium sat intact but vacant for decades.

The same website providing the page about the State also has this page about the house’s earlier life as the Universal Theatre. The Universal opened on May 9, 1922. In 1926, a new owner had a Wurlitzer organ installed. Lenoir heard its first talking picture at the Universal on May 20, 1929. The Universal and its sister theater, the Imperial, were taken over by Paramount-affiliated North Carolina Theatres on December 11, 1932.