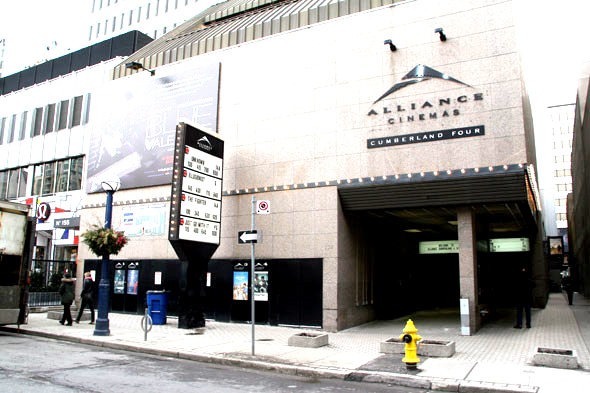 Located in the Yorkville area of Toronto, the Cumberland 4 was opened December 11, 1980 by Famous Players. It is was last operated by Alliance Theatres (formerly Alliance Atlantis). It screened primarily art and independent films, and had been a venue for the Toronto International Film Festival.

I agree that this area could definitely use another cinema. On the other hand, the Cumberland was a poorly designed space, even one of Famous Player’s CEO’s (won’t mention which one) agreed with me on this. In addition, I always thought it was an embarrassing venue to hold screenings in for the Toronto Film Festival. I won’t be shedding any tears over its demise.

Yes, I agree Jon, not a very good venue, but it was just nice having a theatre actually located in Yorkville. I have often wondered what happened to the Plaza Twins in the Hudson’s Bay Centre, are they just sitting down there empty after all these years? The entrance is all sealed up, you would never even know those theatres existed. If only FP had found a replacement for the Uptown before their demise, we might have that AND the Varsity…alas now it’s only the Varsity left in what was the most theatres in a few short blocks of each other in all of downtown.

Tim, I heard that another change may be on the way. There’s a rumour that AMC’s Canadian cinemas may be sold. If the new owner is Canadian, the AMC @ Yonge & Dundas may finally have access to more product. It’s strange that the tiny Carlton, located a mere 10 min. walk away from the AMC gets titles that the AMC doesn’t have access to. And speaking of the Carlton, what will they do when the distribs stop providing them with 35mm film prints?

Yes, I’d heard that too Jon. I guess the only other major player in Canada now is Empire, now that Famous Players is gone. Maybe they would like a sparkling new downtown multiplex since they have nothing downtown. I wish they had taken over the 10 screen one proposed by FP at One Bloor since the area needs something else. Now the Varsity has to try to fit in the blockbusters the Uptown used to have and the artsy stuff that the Cumberland had. I wonder what WILL happen to the Carlton since it’s only recently been taken over.

How do you change the status of this to Closed?

Jon – wouldn’t Cineplex (which I don’t think can buy AMC outright – it’d have to be Empire or another player would have to enter the GTA) – insist on splitting product between Scotiabank and Younge & Dundas. Another theater that may benefit from the Cumberland’s closing is TIFF Bell Lightbox.

With that said, I’m sad to see this one go, I’ve had several good movie experiences here (this was the first theatre I ever went to in Toronto, on the eve of my first TIFF in 2007, in 2008 it was used for press screenings when AMC opened). Confusing and odd as its layout was, there was something of a classy vintage urban charm to it (not just a big box suburban type of multiplex in the middle of a city like Scotiabank). I’m not sure a new competitor could open in Yorkville/Bloor and get decent product, the Varsity will sometimes be showing films on the same weekend they’re exclusive in NY and LA. A dedicated luxury theatre like Cineplex’s VIP or iPic Theaters in the US would be a great fit for Yorkville.

I’ve always found it curious John and Jon that U.S. chains haven’t seemed to make it here in Canada as elsewhere. Cinemark tried it out west and AMC here in the east, we have everything else from the states, stores, restaurants, etc, I wonder why not movie chains? Now with FP gone there is really only 2 major chains, Cineplex and Empire with a few small ones like Rainbow, Landmark and a few independents..

In the case of AMC, was a business decision from the new Chinese ownership to shed its canadian interests to focus on getting stronger down in the States which is defintely unfortunate since which the possible exception of the digital Imax I much prefer the presentation and set up of a lot of the AMC chains and lack of ads as opposed to the CE. Think AMC was running a distant 3rd in attendance to Cineplex and Empire in terms of numbers.

December 11th, 1980 grand opening ad along with Westwood and Runnymeade in photo section.