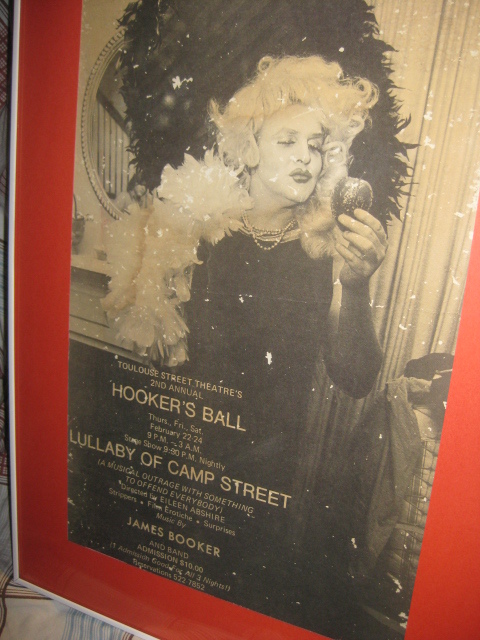 In the mid-1970’s it went through periods screening gay then straight adult movies. Later it played repertory movies and occasional live shows. The theatre closed in the early-1980’s. It was converted to restaurant/bar called One Eyed Jacks. It has since reopened as a live music theatre.

The Toulouse Theatre opened on Friday October 16, 1970, showing The Virgin and the Gypsy. It was owned by Walter Reede Theatres, who also operated the Sena Mall Theatre in Metairie at this time.
As a Walter Reede Theatre, I remember that instead of the standard concession stand, there were vending machines in the lobby, one for popcorn, one for drinks, and another for candy. The projection booth had the latest Simplex equipment with Xetron xenon lamps, and an NTS automation system capable of changing from one reel to another.
During the time that Walter Reede operated this theatre, many policies were tried. Art/foreign product, some nostalgia, but nothing seemed to be the answer to getting people to come to this nice little theatre.
The Toulouse faced some challenges, first being that parking in the French Quarter was a nightmare, day and night. Although there are residences in the French Quarter, apparently there was not enough business to keep this theatre operating.
By June of 1974, the Toulouse was closed. It was sublet to George Echols, who operated ITU, an adult theatre corporation, which also operated the Paris at this time. It opened in August of â€™74, showing gay adult films. This policy lasted for only a short time. Straight adult films showed at this theatre until it was closed by May of â€™76. By July, it was again being operated by Walter Reede, this time as a $1.00 sub-run theatre, but closed by January of 1977.
Along comes Russell Rocke, a Tulane University law school graduate, and author. His plans included not only a movie theatre, but a cafÃ©, and a late night piano bar. The Toulouse Street Theatre opened in June, 1977. Double features were changed a twice weekly, included a mix of recent releases, foreign and art films, and some cult classics. It was the perfect mix for the funky little French Quarter theatre, and it had a nice run. Some live entertainment was presented, including Vernel Bagnerisâ€™ play, which originally appeared at the Lyric Theatre in New Orleans in 1927, entitled â€œOne Moâ€™ Timeâ€. The play did huge business, and eventually opened off Broadway. In 1984, when the Worldâ€™s Fair acted, as Rocke put it, as a tight magnet, business dropped, and the Toulouse Theatre closed as a cinema for the final time. I was a part time projectionist at the Toulouse in the late 70â€™s and early 80â€™s. It was a fun place to work, and a nice place to see a movie.

This was my street urchin experience there. Note that the Stripper’s Ball was held at the Toulouse as was various live bawdy events.

Fat Tuesday 1979. Police strike cancels Mardi Gras. No law. I’m a 19 y.o. boy hustling draught beer for a buck a cup in front of Toulouse St. Theater (now One Eye Jacks). Old man dropped by, friend of the owner and said the strike canceled his gig out at Tipitinas. Hell, said my boss, let’s drag out the piano so’s you can play, and so we did, him a big burly full bearded man wearing a bottle fly green chemise, garter belt w/net stockings, and spike high fuck me heels and all scrawny and street ragged, hauling a untuned upright out onto the cobbles. All so I could sit and sell beer and hotdogs while old man banged out the night like crazy and drew up a crowd. We didn’t sell many beers or dogs, We all listened while he played, hours went by, getting drunk drunk on piss warm beer foam and trying to top eachother’s bullshit stories, he way more than me. It got misty-damp around 3 and the streets were deserted, everyone kinda quiet and thoughtful, like the devil sneaking from the pews. We shook, His long boned fingers giving me the grip, I, a dumb white boy, and he, just a who that to me then, he to a game somewheres and me to the lobby and sleep. Dawn broke through the mist a couple hours later. Turns out that that was my last Tuesday and I learned later that the old man died before the next coming Mardi Gras. That’s what he did on his very last Mardi Gras. Turns out, though a lot of folks said he was Mardi Gras, A one Mr. Professor Longhair…. It was good sleeping on those huge bags of leftover hotdog buns, all buzzed with ghostly triplets flowing in echos through my ears. Thank you Fess! I believe that it was soon after the Theater closed, due in part, to the night of the strike. Wild shit happened everywhere that night because there were no tourists or cops, just the national guard and they didn’t lift a finger….

Just found this page. Brings back memories. I was a young lad from Montana who moved to New Orleans for a year – Feb. 1978 thru Fat Tuesday 1979. The comment earlier is true – cops were on strike that year and it was WILD in the quarter. Had the time of my life – mostly around our favorite haunt, The Chart Room. I didn’t make it to the Toulouse Theater that day but wish I did. I did however volunteer there most of the summer and fall and winter ‘78-'79. Remember the little bar up front and an aged lady in a pixie costume doing handsprings in the bar on Halloween! What a howl! I do remember Russell (and his nice looking girl in a tiger outfit). I helped with mailings and hung around the projection room. One night I agreed to sub for the regular projectionist who had a date. It was a rare film as I recall – old – and the film broke in half (after going through lens) and started spilling all over the floor. I tried to find the splicer but it was not in its usual spot and so I panicked. With film going all over the floor I ran downstairs to the bar and yelled out for help. The bartender said the projectionist and his date were in the theater (which was still on) and so we ran in and found him and got him to come upstairs to the projection room. Film was all over the floor. He found the splicer and I had to reel the film back onto the spool as fast I could before the 2nd showing of the film. I was sweating bullets and said I would NEVER be a projectionist again. But my love of theaters was born. Today, I am on the board of one of the best independent theaters in the country – the Hollywood Theater in Portland, Oregon. Those were fun, crazy times back in New Orleans. With the Toulouse were still around today. RIP!