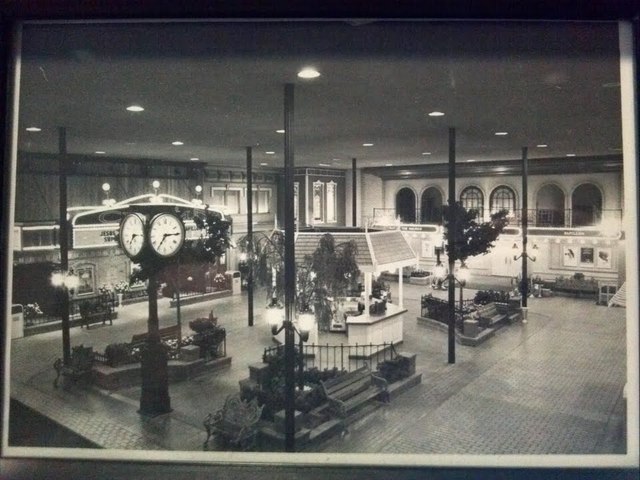 The last of the additions (six) were added on August 17, 1973. They were based on a style of an early-1900’s downtown theme. There were stores inside which were later removed and stores that had entrances outside the entrance to the theater.

As I remember it there were two snack bars – one was in the center of the downtown area and one was pushed up between the two entrances to the 512 seat theater. It was taken over by Syufy Enterprises on October 15, 1984.

The Red Rock was closed and finally demolished in April 2002.

Crystal, I was one of the Bugsey Malone ushers. Any chance you can post the pic you have?

Hi JAS, I will post it as soon as possible. Hopefully soon!

Very cool to discover this conversation about the Red Rock 11 Theaters in Las Vegas. Great memories. Our family moved to Las Vegas from the Midwest when I was in junior high school. My dad, who some of you may remember if you lived in Vegas in the 70s and 80s, was Walt Reno, the TV and radio personality. My dad and I and my friends spent lot of time seeing movies at the Red Rock in the 70s, from classics to obscure movies that most people probably don’t remember. We got to know Boyd, the manager, pretty well. Very nice guy. The theater really was so “Vegas.” So over the top. But in a good way. It was fun. The town square section in the back was amazing. Didn’t each movie theater in that area actually have its own marquee and its own name? My dad even let me see a few R-rated movies at the Red Rock when I was a teen, including cult films like “Harold and Maude” and Oscar-winners like “The Last Picture Show.” The last movie I remember seeing at the Red Rock before was an entertaining stinker called “Moment by Moment” with John Travolta and Lily Tomlin. It wasn’t a great movie by any stretch, but it was filmed in California and it got me and my buddies even more excited about going to California to attend college. I stayed here (San Diego) after college and remain here to this day, and after my dad died I really didn’t have much reason to go back to Vegas. But it still holds a special place in my heart. Good times at the Red Rock. I could name just about every movie theater in Las Vegas back in the 70s. But the Red Rock was special. It had to be one of the first multiplexes in America, yes? This Quora page addresses the growth of the multiplex, but neglects to mention the Red Rock 11: https://www.quora.com/What-was-the-first-multiplex-theater-in-the-United-States

I was so saddened to learn about the death of Boyd Moseley, the manager of the Red Rock. I had worked my way up from candy girl to cashier and remember Boyd bringing his wife and children in frequently. He was such a proud dad! I used to love to work in the plaza ice cream parlor, and Boyd would sit at a little table next to the parlor and the box office, smoking and carefully keeping track of everything that went on in the theater. He would chat with me, and I just thought he was the most wonderful boss!

I remember that, as a little girl, the original Red Rock, was only one theater—the huge Theater One, which was in the front of the theater. Moms could buy movie packages from the PTA and drop their kids off every Monday or Tuesday for a movie and a chance to be kid free for awhile. The theater would be packed with kids, and we’d watch old movies like “Tammy and the Professor.” It was incredibly noisy in the theater with all of the unattended, summer wild kids. It was during this time that I bought my very first package of Flicks—a long tube wrapped in foil that had chocolate chips inside.

Many years later at age 17 I got a job working in the newly expanded theater. People used to marvel that we had eleven theaters, and I think it was billed the largest multi-cinema movie theater in the world. When Bugsy Malone opened, Boyd asked two of the ushers, myself, and another girl to go to a thrift store and buy outfits from the gangster era. The four of us posed sitting in the plaza for a photo that was in the RJ newspaper advertising the movie. I would LOVE a copy of that photo if anyone has one!

Movies ran $4.00 for adults back then, and I remember how people used to grumble about the price. Then we ran “The Deerhunter” and the tickets were $5.00, and people thought THAT was insanely high, but they still paid. One Christmas, we ran “Animal House,” “Good bye Girl, and "The Turning Point” in the plaza, and the lines would be out the door. When a movie was sold out, the other cashier and I would holler, “‘Animal House is sold out!” People would then choose another movie.

It was great fun working there. Boyd intuitively knew how to hire and train the best kids in town. We were all great kids, and we all came from different high schools, but we all got along great! Rory was the projectionist back then, and he was such a handsome, sweet man with the most beautiful Irish accent. Boyd truly gave all of us teenagers such a great first job and an excellent training ground for future jobs. When a customer was rude to me once, he actually said to the man, “I don’t allow people to treat the kids that work here like that. I hire good kids, and their parents expect me to look after them while they are here.” The customer apologized, and I was so impressed that Boyd would stick up for a skinny seventeen year old.

Still married for 35 years to the handsome usher who worked tearing tickets when we met in high school at the Red Rock. We’ve raised two great sons, still have wonderful memories of the kids we worked with and our wonderful first boss. All that remains of the Red Rock are a brick and a piece of the red curtain that my husband managed to pull out of the rubble when they tore it down.

If anyone knows where I can get a copy of the RJ photo with the Bugsy Malone picture, please let me know. To Boyd’s son and daughters, you father was a wonderful boss and very kind behind his facade gruff exterior.

How great it is to read about the memories people had at the Red Rock Theaters. My name is Jeff Jones, I graduated from Western High School in 1966 and began working for Horst Schmidt and Mrs. Lucille Cragin that same year. They owned KRGN FM Radio Station located on east Sahara. I worked there recording music on tape to be played back later on an automatic playback system. Later that same year Horst made me manager of the Red Rock Theater. At that time there was only one theater. Mr. Leon Stephenson was the general manager of both the Red Rock theater and the El Portal theater. Horst and Mrs. Cragin owned the theaters, but Mr. Stephenson was responsible for running of the theaters. Mr. Stephenson was one of the best people I ever worked for. In 1968 I joined the Air Force and went to Vietnam. While in Vietnam I received a letter from Horst saying Mr. Stephenson had passed. I received that letter with great sadness. He died in the lobby of the Red Rock theater when nobody else was there and I believe he was found by Rory O'Conner,our projectionist. Rory was a great little Irishman. He really had an Irish accent. It was great fun to ride in his Rolls Royce Silver Cloud. I don’t think he would mind if you knew the lady on top of the radiator was sterling silver. When I got out of the Air Force in 1972 I came back and worked at the Red Rock and El Portal theaters. In 1972 we showed The Godfather. We had it in four theaters and the lines went around the theater and crowd control was really a problem. We had a few celebrities show up. One night Tony “The Ant” Spilotro shows up with his wife and bodyguard. He doesn’t want to stand in line like everybody else. So, his bodyguard starts calling me every name in the book. I just want to get him out of the lobby, so I seat his party and as i’m walking away he stuffs a five dollar bill in my pocket. After that incident I started carrying 357 under my jacket. These guys really don’t care about anybody but themselves. The El Portal theater was the oldest theater in Las Vegas. There is a plaque in front of the building where it used to be on Fremont St. It was the first building in Las Vegas to have air conditioning in 1928. I read were Horst passed away in 2004 with great sadness. I enjoyed our talks. He told me what it was like to grow up in Germany during WWII. I left the Red Rock theater in late 1972 and that’s when Boyd Moseley replaced me as manager. I remember the faces of the candy girls and ushers, but it’s hard to remember the names, I’m now almost 70. One of the best times of my life was growing up in the sixty’s in Las Vegas. In 2005 I went to visit my Mom in Las Vegas and I drove past were the Red Rock Theater used to be. There was just a concrete slab – I cried.

Hi Everyone, I just posted the Review Journal photo of the Bugsy Malone promotional. Sorry it took so long. No I don’t have the date it was taken. I also posted pics of a Redrock 11 matchbox. It was great fun and a privilege to work there. One thing to note is that there were celebrities who would show up to attend movies. I remember Mel Torme.

This opened on June 10th, 1966. Grand opening ad in the photo section. more to come.

This expanded to 11 screens on August 17th, 1973 integrating the Red Rock 4 Theatres, The Continental, The Americana and the Red Rock Plaza Theatres with 5 screens. It was the world’s largest theatre complex at the time of the opening.

Expansion phases for this cinema. June 24th, 1971 4 screens. March 31st, 1972 5 cinemas as the Continental screen is added. April 22nd, 1972 6 screens as the Americana screen is added and 11 screens on August 17th, 1973 making this the world’s largest theatre complex at the time. Grand opening ads posted.

Became part of Syufy theatres on October 15th, 1984. Syufy gains a monopoly on first-run movies in the area after this purchase.