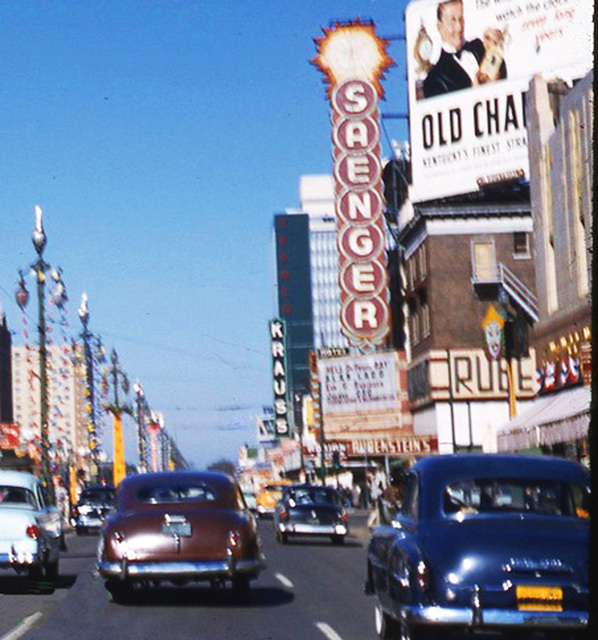 The Saenger Theatre in New Orleans was the flagship of several Saenger theatres throughout the South, and the New Orleans theatre was the largest of them all, seating 3,400. Designed in an Atmospheric style by architect Emile Weil, the Saenger Theatre cost over $2.5 million to construct, and its opening in 1927 celebrated with a parade attended by thousands along Canal Street.

Its cavernous auditorium’s ceiling, like other Atmospheric style theaters, was painted dark blue, and sprinkled with constellations over which clouds drifted before a show began. Its side walls were designed to look like a Renaissance Italian villa’s courtyard, with plaster archways, doorways and statuary decorated with greenery.

The enormous proscenium arch was heavily decorated by plasterwork, coated with gilding, and in a cartouche in the arch’s center, a shield with the letter “S” in it, surrounded by a plaster wreath.

A large crystal chandelier hangs in the marble and gold filled main lobby, one of a dozen that once hung throughout the Saenger Theatre. However, to finance its upkeep and renovation over the years, the other eleven have since been sold off.

A Robert Morton Wonder Organ, of 4 manual, 23 ranks, built specifically for the theatre, was opened by organist John Hammond and associate organist Ray McNamara. It is still in its original position. It was damaged during a concert by Red Hot Chili Peppers on December 15, 1989. Restoration began in 1996 and was completed in 1999.

Originally opened for motion pictures and live stage shows, the Saenger Theatre was sold just two years after it opened to the Paramount-Publix chain for just over $10 million. In 1964, its vast balcony was walled off and transformed into a second auditorium, known as the Saenger Orleans.

The theatre was added to the New Orleans landmarks list in 1977, and later in the same year, was listed to the National Register of Historic Places. In 1978, the Saenger Theatre was closed and sold to E.B. Breazeale, who spent over $3 million (on top of the $1 million he paid for the theatre) to transform the great movie palace into a performing arts venue. After nearly two years of meticulous restoration, the Saenger Theatre reopened, its seating capacity lowered to 2,736, appearing just as spectacular as it did when the Saenger brothers opened it nearly half a century earlier.

The Saenger Theatre is one of New Orleans' premiere venues for the performing arts, including Broadway shows, concerts and classic motion picture screenings.

The Saenger Theatre was closed by the Hurricane Katrina flooding of 2005, and needed extensive repairs. In January, 2008, a deal was announced for a $38 million renovation of the theatre. However, restoration/renovation didn’t begin until January 2012. It reopened on September 27, 2013. The owner donated the theatre to the city but will operate the theatre.

Here is an article about the progress being made on the restoration efforts, with pictures. Original chandeliers have been found, and there are hopes of eventually restoring the theater’s organ.

The Saenger opens tonight. I have been following the renovation closely. From the photographs on the internet and the site visits that I have made, I believe that the finished product is spectacular and far beyond my expectations.

I attended the Jerry Seinfeld performance at the Saenger Saturday night. The theatre is very beautiful. I have been going there since the mid 1960’s and it is more spectacular than it has been in the last 50 years. The exterior is restored and the marquees replicate the 1927 originals nicely. The reinstallation of the lights and trellis on the rampart street side building is also very nice. The vertical sign on Canal Street has not yet been installed but renderings of the sign indicate that it will be a faithful replication of the 1927 original. The most outstanding part of the restoration is the new paint scheme by Evergreen Architectural Arts. The painting, leafing (Dutch metal), glazing and faux finishes are beautifully executed. I seriously doubt that all of the color selections are based on the 1927 originals, but the overall effect is totally in keeping with what one would expect to see in a movie palace. Details that had long been buried under decades of paint are now vividly delineated. The ceiling of the arcade has had its stenciling restored, and three replicated chandeliers illuminate this room. In the auditorium, there are more stars than ever before in the Saenger sky. The original house draperies, seating, and decorative lighting have all been lovingly restored. Awnings once again adorn the windows of this Florentine courtyard, trees and vines drape the upper parts of the courtyard walls as clouds drift overhead. The only issues that I have with the restoration is that it is not finished. In the arcade, portions of the upper walls that originally had wall covering were blank white panels. The finishes on the lounge walls were not complete. Several light fixtures in the auditorium were not working. The soloist stage house left was not completely painted and the beveled mirror appeared to be missing. At the entrance to the second balcony, house right, a large plaster urn that had once graced the top of the wall was missing. Several pieces of plaster trellis that line the upper wall of the auditorium appear to have been cut off an not replaced. In fact, if you look closely you can see the inside of the end of the false trellis work where no attempt was even made to disguise the damage. Finally the profusion of oversized refreshment counters in the orchestra and mezzanine lobbies restricts pedestrian flow and generally diminishes the beautifully of the restored spaces.

With all of this to see, Jerry Seinfeld was a little superfluous.

A lot of nice photos, virtual tours and videos at the Saenger’s new official website (http://www.saengernola.com/).

The unofficial website (http://www.saengeramusements.com/theatres/nawlins/saenger/newosaeng.htm) has a lot of good historical photos and architectural renderings. Also links to pages about other Saenger-owned theatres.

Here is a page about the renovationof the Saenger Theatre, on the web site of Martinez & Johnson Architecture. The firm has handled or collaborated on the renovations of several historic theaters.

Hasent this theatre been damaged by the hotel collapse??

Acording to news reports debris from the collapse of the new building in the next lot fell onto the theatre roof; the theatre was closed and the show playing there had to vacate. I don’t know what the current status is.

I read the same as rsalters, Wicked cancelled the rest of it’s performances due to the street being closed and the implosion of the cranes apparently broke a few windows at the Saenger.

From the theatre’s website: Because of the ongoing search and rescue operation, the Saenger Theatre is still under a mandatory evacuation. We are unable to answer our phones and any email responses will be delayed. For the most up-to-date information on all upcoming shows, please continue to check this page, our Facebook Page, and our Twitter Page.