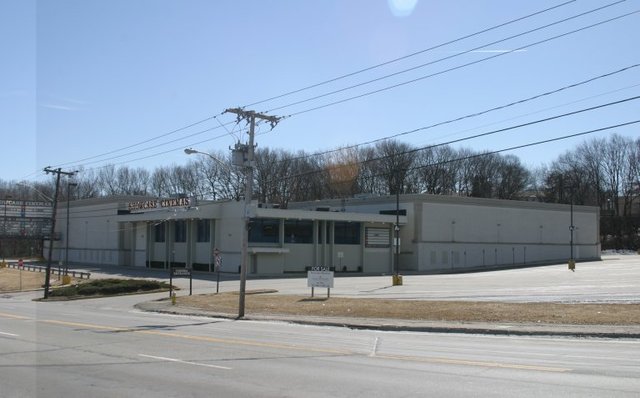 The Showcase Cinemas at 141 Winthrop Avenue in Lawrence opened as a twin theatre June 23, 1965 with Burt Lancaster in “The Train” and John Wayne in “In Harms Way”. It was constructed in a swampy area along Route 114 next to the southbound ramp to the recently constructed I-495. The two auditoriums were elongated octagonal shaped buildings and sat approximately 850 in theater one and over 1,150 in theater two. Theater one was one of the only in the area designed for Cinerama and was equipped for 70mm stereophonic as well as 35mm film. The screen in theater two was said to be larger than the screen at the Merrimack Park Drive-In. The large lobby featured a mezzanine and wet bar was occasionally rented for various functions.

The company also owned addition property across the street behind the then existing Stadium Lanes bowling alley and Kings Row lounge. Not long after it opened plans were underway for expansion with an additional two screen complex directly across the street and the foundation was laid. The State then took the property for reconstruction of the 495 off ramp and after years of litigation another six screen theater was constructed at the further end of the property where it still is.

In the early-1970’s, the original two auditoriums were split with long straight walls down the middle of each to convert it to a 4 theater complex ranging in seating from 350 up to 550. In 1980 the second complex was opened across the street. In 2000 the entire complex was redesigned and squared off to create a 6 theater complex with stadium seating.

On September 1, 2008 the company downsized and closed 1-6 along with many of their other theaters around the country. The building remained closed and vacant until it was demolished in April 2018. demolished a few weeks ago