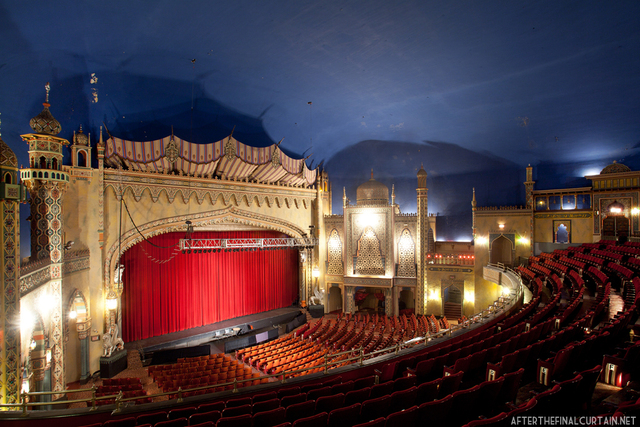 The Avalon Theatre opened on August 29th, 1927 with Douglas MacLean in “Soft Cushions” on the screen and on stage a musical presentation “Dreams of Araby” performed by Bobby Fisher and a cast of 70. Organist Leonard Smith opened the Wurlitzer 3 manual 15 ranks organ. With 2,414-seats, the theatre is famous for its elaborate and exotic interior, which was designed in Middle Eastern style by John Eberson (who also designed the long-lost Paradise Theatre, in Chicago’s Garfield Park neighborhood) for the Cooney Brothers National Theaters Corp. circuit. The Avalon Theatre stands on E. 79th Street between S. Cornell Avenue and S. East End Avenue, in the South Shore neighborhood. It became part of the Warner Brothers circuit during the 1930’s when stage productions were dropped, and they operated it as a full-time movie theatre into the 1940’s and 1950’s.

Its fantastic décor included an Atmospheric style auditorium with a star-filled deep blue sky and a Persian bazaar on the side walls. Hanging from the soaring lobby ceiling is what was once described as the largest oriental rug ever made, a flying carpet if you will.

Additionally, there are five huge murals in the lobby, which were made of tiny inlaid mosaic tiles, and a giant stage, which is guarded by four menacing gargoyles.

After closing as a movie house in the late-1970’s, the theatre became home to the Miracle Temple Church, but in 1987, was reborn as a performing arts venue. During this conversion, the theatre was returned to its original appearance and renamed the New Regal Theatre, in honor of Chicago’s legendary original Regal Theatre, which was razed after a fire severely damaged it in the early-1970’s. In June 1992 the New Regal Theatre was designated a Chicago landmark.

After years of low attendance, and often standing dark for long stretches of time, the New Regal Theatre’s management announced that the great former movie palace would be closing at the end of June 2003.

Luckily, after three years closure, this landmarked treasure was rescued once more, and didn’t meet the fate of its fabled namesake over three decades ago. The New Regal Theatre re-opened in October 2007 as a venue for concerts and other live performances, with the “New” portion of the name of the theatre gone. It is totally black owned and managed by a non-profit organization ‘We Are Our Brother’s Keeper’. It was closed in 2010 when the operators were made bankrupt. The building was purchased by the Federal Deposit Insurance Corporation and is managed by Jerald Gary.

It was set to re-opened October 1, 2017 as the Avalon Regal Theater, but that never happened. On September 9, 2018 singer Kayne West announced he would be involved with getting the theatre open again. Restoration would cost in the region of $10 million, and in the meantime Jerald Gary is fixing the plumbing.

(Amber Fisher, Sep. 10, 2018) – Kanye West announced on Sunday, Sept. 9 that he supports the restoration of the Avalon Regal Theater in Chicago’s South Shore neighborhood, which has since been transformed into a church, then a performing arts venue. “We’re doing Chicago Comedy Jam. We’re going to restore the Regal Theatre,” tweeted West, a South Side native. According to several reports, West was likely referring to the Chi City Comedy Jam, an annual stand-up comedy festival that features black comedians from Chicago. This year’s Chi City Comedy Jam will be held Oct. 5-6 at the Arie Crown Theatre. No further details were forthcoming about when the festival would be held at the Avalon Regal Theater. South Side native and entrepreneur Jerald Gary, 33, bought the theater for $100,000 in 2014, according to the Chicago Sun-Times. He’s since been trying to raise money to fix up the building, and sent a message to the Sun-Times saying he acknowledged West’s tweet, according to the report. Gary couldn’t be reached for further comment, the Sun-Times reported.

Link from August 2017 with photos.

Hope this winds up being true, but Kanye West says he will be restoring this amazing theater.

I haven’t been down 79th Street east of the Dan Ryan in about two years. But at that time it was pretty rough. Boarded up buildings, vacant lots, a bunch of police tape from some large recent crime, two menacing guys sitting inside a car parked in a vacant lot doing God knows what.

This is an incredible building in decent shape. But I suspect there are many challenges involved in bringing it back to life.

The owner owes half a million in backed taxes, let the theatre interior become destroyed with water damage and still nothing done to this theatre. Went into it today for open house chicago. Extreme water damage in auditoriumsave this theatre now!

Not restoring there is nothing being done with this theatre!