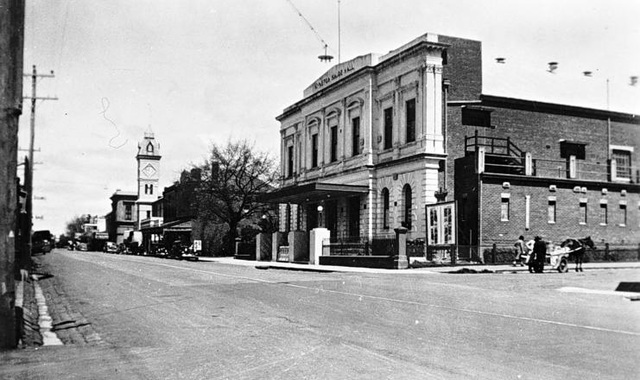 Located in the small town of Kyneton, north of Melbourne. The Shire Hall was built in 1878-1879. It was added to and converted into a cinema in 1929, operating into the 1950’s. Seating is provided in stalls (flat floor or bleachers) and in balcony levels.

It was renovated in 1995 as an arts centre, presenting live performances.

Kyneton Shire Hall Located at 129 Mollison Street, the Kyneton Shire Hall is recognised as one of the most substantial Shire Halls in Victoria. It was built in 1878-1879 and added to in 1929. The Heritage Register records that “The principal elevation of the Shire Hall is significant for the unusual architectural synthesis of elements of the first stage designed by the important architect William Pritchard, and the second stage designed by theatre and civic hall specalists Richardson and Wood some fifty years later. Both designs are characteristic of their individual eras while forming an architecturally unified whole.

The 1929 internal alterations which were designed to provide a combined picture theatre/hall are less sympathetic to the original than the exterior works, but are an important manifestation of the recognition of the desire of communities to adapt to the growing popularity of the cinema in the 1920s – Contributed by Greg Lynch –